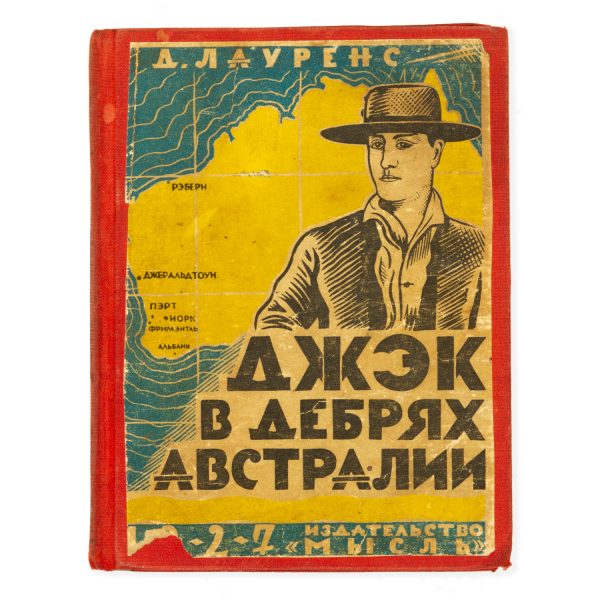 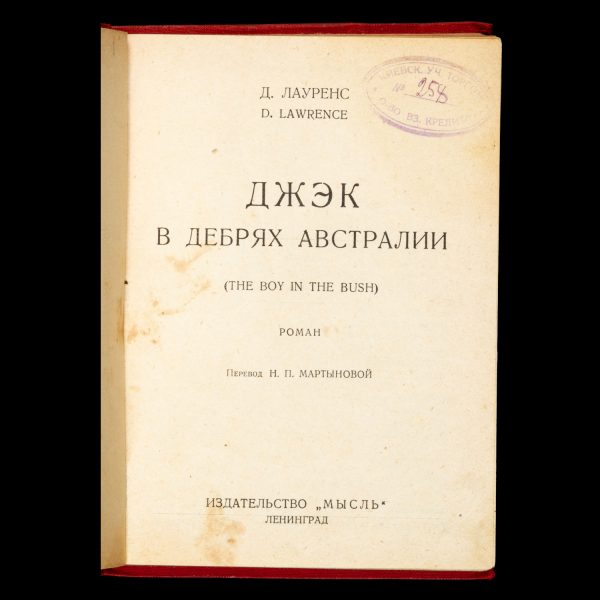 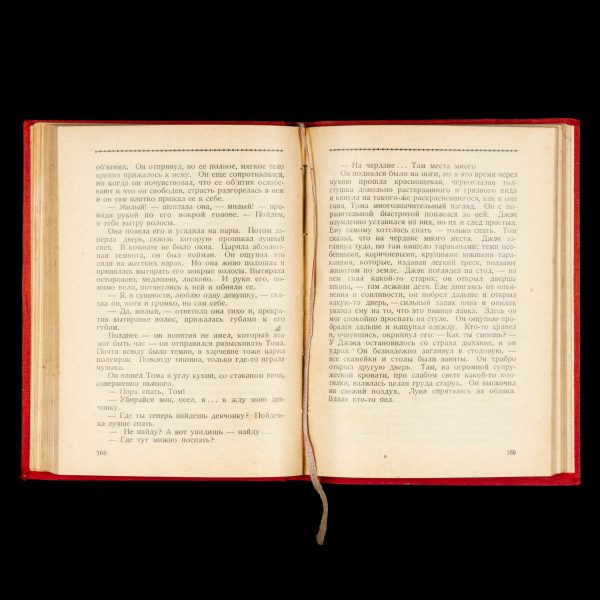 [=Jack in the wilds of Australia]. Leningrad : Izdatel’svo Mysl’, [1927]. Octavo (170 x 130 mm), near-contemporary red cloth over boards, the front board preserving the original pictorial upper wrapper which features an illustration of the novel’s protagonist (Jack Grant) superimposed on a map of Western Australia showing Roebourne, Geraldton, Perth, York, Fremantle and Albany, with the date 1927 and publisher below; backstrip with manuscript title in Russian; title page with 1920s wet stamp of a Kiev (Kyiv) commercial college library, pp 280; internally clean and sound with the exception of the title page (light foxing) and last leaf, a contents page with chapter headings (light marks, creasing and edge tears).

Rare first Russian edition of D. H. Lawrence and M. L. Skinner’s novel The Boy in the Bush, set in the outback of Western Australia in the nineteenth century.

No copies located in OCLC.

The Boy in the Bush is a collaborative work of fiction, of which D. H. Lawrence and Western Australian writer M. L. “Mollie” Skinner should properly be considered the joint authors. Indeed, the first edition, published in London by Secker in 1924, acknowledges this fact, attributing authorship to ‘D. H. Lawrence and M. L. Skinner’ on the title page, and subsequent English-language editions (including the first US edition, also 1924) have continued to print both writers’ names. However, when the novel was translated into German, as Jack im Buschland (1925), Russian, as Dzhek v debriakh Avstralii  (1927), French, as Jack dans la brousse (1938) and much later Spanish, as En el erial (1963), there was no acknowledgement of Skinner’s standing as a legitimate co-author of the work. This literary injustice persisted for well over 60 years (including in, as late as 1994, the second Russian edition); in fact, the Australian writer’s name does not appear in print anywhere in any translated edition until the Japanese edition of 2015 (Yūkaribayashi no shōnen).

During their brief visit to Western Australia in 1922, English writer D. H. Lawrence and his wife Frieda stayed at a guesthouse in Darlington, in the Mundaring district northeast of Perth, which was run by Mollie Skinner, a nurse with an undoubted flair for writing who had previously published a memoir of her wartime experiences (Letters of a V.A.D., 1918) and contributed to a number of different periodicals, including the West Australian and the Western Mail. Encouraged by Lawrence to write the life story of her brother, Jack, Skinner later sent him her original manuscript for a novel called The House of the Ellises. Lawrence was favourably impressed and offered to edit the manuscript. The result was the lyric novel, The Boy in the Bush (1924).

The novel is set in Western Australia in the early 1880s. Seventeen-year-old Jack Grant has been sent out from England by his parents to board with the Ellis family, who are establishing a farm on the eastern side of the Darling Ranges. What Skinner had written was essentially a romantic novel, but Lawrence used her storyline as the substrate for a more psychoanalytical work, introducing the protagonist’s inner monologue to describe his coming-of-age in the Australian bush.

As an exponent of British proletarian modernism, D. H. Lawrence was deemed by the Soviet regime to be a sufficiently anti-bourgeois writer, with ideas sympathetic to the working-class struggle, for his books to be translated into Russian and made available for the Soviet readership. Perhaps, however, the Soviets were under a misapprehension: Lawrence, in truth, mistrusted all political ideologies and large organised groups, and in 1924 – the same year as The Boy in the Bush was published – he had even written an epilogue to his own 1921 textbook Movements in European History in which he denounced both fascism and Soviet-style socialism.

Mollie Skinner’s second novel, Black swans, was published in London in 1925. Her English editor Edward Garnett described it as being ‘so damn, damn bad … so damn, damn good’ (ADB). A posthumously published autobiography, The Fifth Sparrow, edited by Marjorie Rees and Mary Durack Miller, was published in 1972. Her literary papers, including radio plays, are held in the Battye Library.