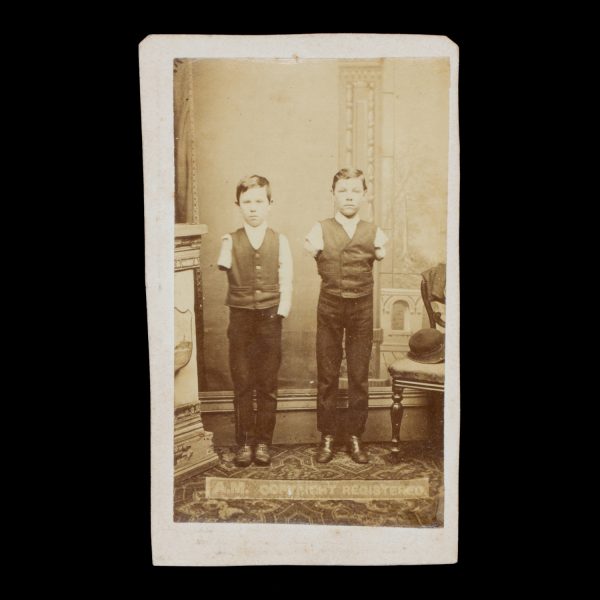 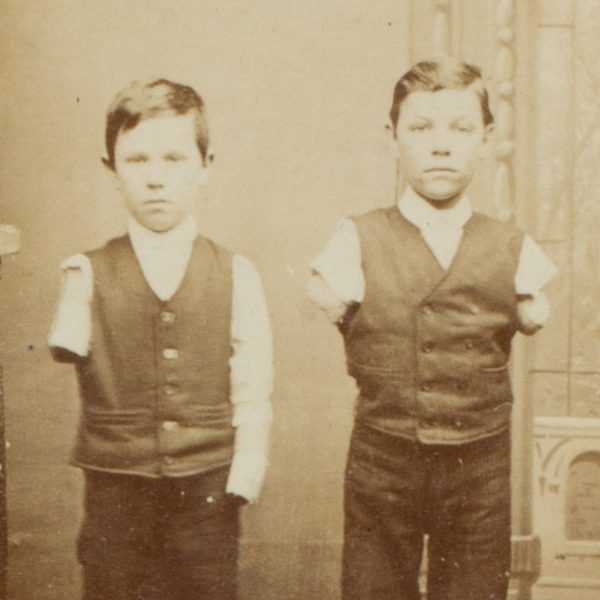 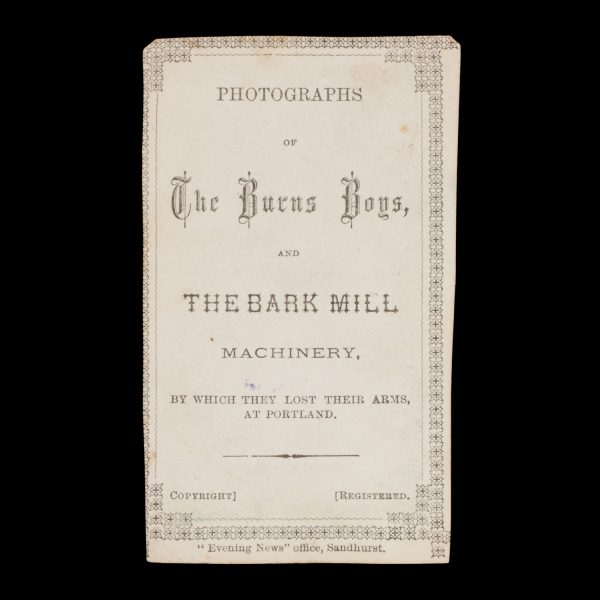 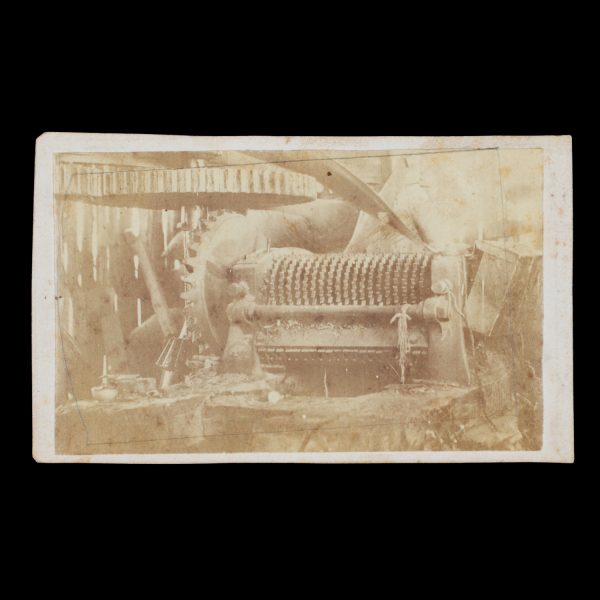 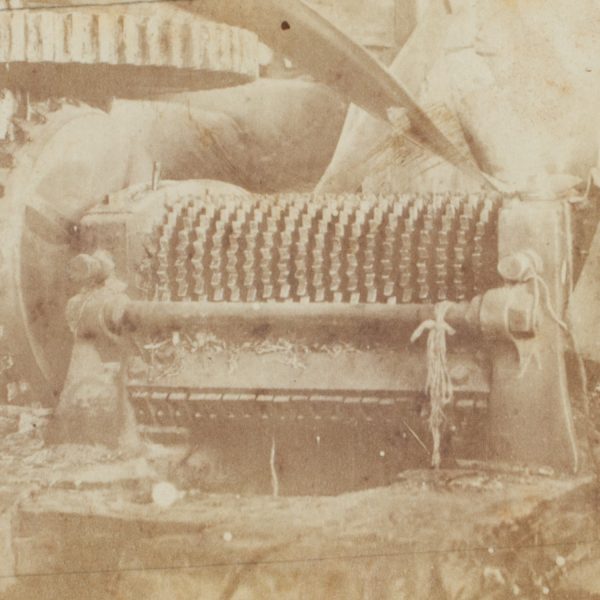 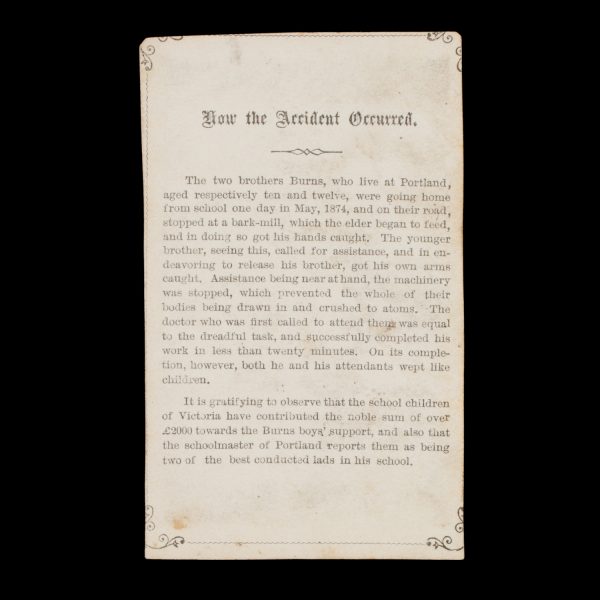 [WESTERN DISTRICT] Photographs of The Burns Boys, and the Bark Mill machinery, by which they lost their arms, at Portland.

[1874]. Two albumen print photographs, carte de visite format, 104 x 62 mm (mounts); one is a studio portrait of the two Burns brothers showing their amputated arms, the negative with caption in manuscript ‘A.M. Copyright Registered’, verso with printed title in various fonts ‘Photographs of The Burns Boys, and the Bark Mill machinery, by which they lost their arms, at Portland’, and ‘Copyright Registered / “Evening News” office, Sandhurst’; the other is a close-up view of the Portland bark mill machinery involved in the gruesome and tragic accident, verso with extensive printed caption titled ‘How the Accident Occurred’; the albumen print of the boys is in fine condition, while the print of the machinery has lost some contrast and has a (newspaper editor’s?) pencilled crop marks; both mounts are clean.

Two rare and significant photographs relating to a horrific accident that occurred in Portland, on the far west coast of Victoria, on 21 April 1874, involving two young brothers, John and Thomas Burns.

Text of the caption to verso of the second carte de visite:

‘How the Accident Occurred.

The two brothers Burns, who live at Portland, aged respectively ten and twelve, were going home from school one day in May [sic], 1874, and on their road, stopped at a bark-mill, which the elder began to feed, and in doing so got his hands caught. The younger brother, seeing this, called for assistance, and in endeavouring to release his brother, got his own arms caught. Assistance being near at hand, the machinery was stopped, which prevented the whole of their bodies being drawn in and crushed to atoms. The doctor who was first called to attend them was equal to the dreadful task, and successfully completed his work in less than twenty minutes. On its completion, however, both he and his attendants wept like children.

It is gratifying to observe that the school children of Victoria have contributed the noble sum of over £2000 towards the Burns boys’ support, and also that the schoolmaster of Portland reports them as being two of the best conducted lads in his school.’

The only other examples of these cartes de visite are held in the State Library of Victoria. The SLV examples in its Victorian Patents Office Copyright Collection belong to a group of six cartes de visite of the same subject, pasted onto the original Patents Office album page. However, the SLV catalogue entry for this album page erroneously attributes the group to the (non-existent) photographer Aiḿe Marchaud – a misreading of the actual photographer’s name, Aimé  Marchand (SLV holds only a photocopied version of the original register in the National Archives of Australia, hence the error). The SLV (John Etkins Collection) also holds pirated versions of the two cartes de visite offered here, secondary prints produced from photographs of a contemporary newspaper article.

Aimé Marchand was a professional photographer and proprietor of the Royal Photographic Company in Portland. Of French or Belgian origin and possibly formerly an assayer in California, he appears to have begun photography in Tarnagulla on the central Victorian goldfields around 1865 as an assistant to A.B. Clay. By the following year he had settled in Portland, where he opened the Royal Photographic Studio in Gawler Street. From his base in Portland he toured surrounding districts, offering portrait and view services. Marchand earned a “1st Class Honorable Mention” in the 1866–67 Intercolonial Exhibition, but little else is known about his life. He appears to have left Australia in 1878. A misprint of his name in a local directory as Annie Marchand created the misconception that he was one of only a few named women photographers in the colonies.

The first published full account of the Bark Mill accident appeared in the Portland Guardian, April 24 1874:

‘SAD ACCIDENT TO TWO CHILDREN. On Tuesday last about 2 o’clock p.m., Mr. D. Kay’s bark mill, at the north end of Percy street, was the scene of a frightful accident, in which Thomas and John, 11 and 9 years of age, the sons of Mr Anthony Burns, boatman, have been both mutilated in a sad way, and crippled for life. The circumstances of the accident so far as we can ascertain, are as follow :- The two boys, on then way to school went to play in the mill, which is now sub-let with a number of boys. The eldest boy, Thomas commenced feeding the machine with bark, whilst the youngest boy, John played in the shed, or assisted in driving the horse that worked the mill in a circle. In another part of the same shed some boys were shying about pieces of bark already prepared for milling, when one of the pieces coming in the direction of young Burns, and distracting his attention, both hands got caught in the machine spiked rollers, and in an incredibly short space of time both arms were drawn in to the shoulders. The lad driving the mill horse, terrified at the accident, ran away, when the younger Burns, with a bravery beyond his years, after a vain endeavour to stop the horse, ran to the assistance of his brother. But here, melancholy to relate, the poor child was himself caught, the right arm waa drawn in above the elbow, and the left hand and part of the wrist dragged between the rollers. In this dreadful position both the children remained till some person of sufficient sense reversed the machine, when the poor sufferers were taken up more dead than alive from fright and loss of blood. The boys were at once taken to their father’s home, but some time elapsed before Dr. Brewer’s arrival, and both at this time had bled so much that little or no blood followed when the quadruple amputation was subsequently performed. We think that the borough council should pass some bye-law compelling the proprietors of bark and other mills to box
the machinery, so as to guard against future accidents of this dreadful character. A small additional outlay in this case might have been the means of saving these two lads from a mutilation worse than death.’