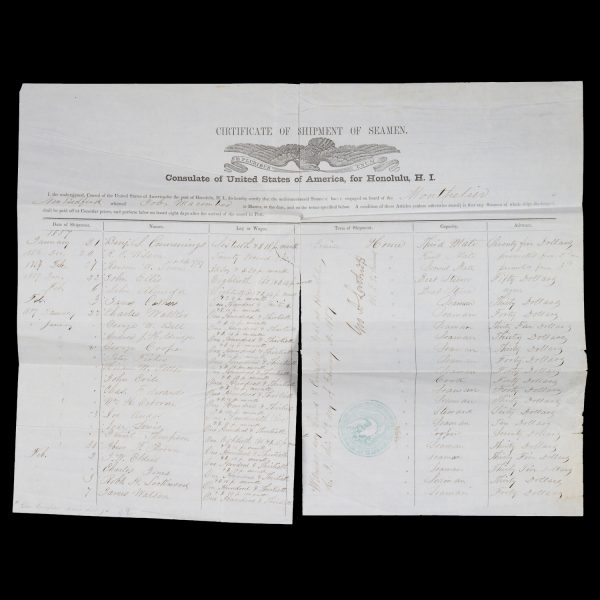 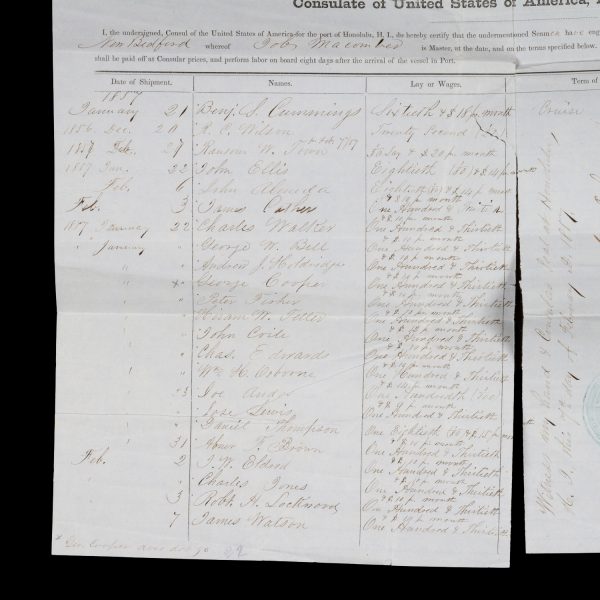 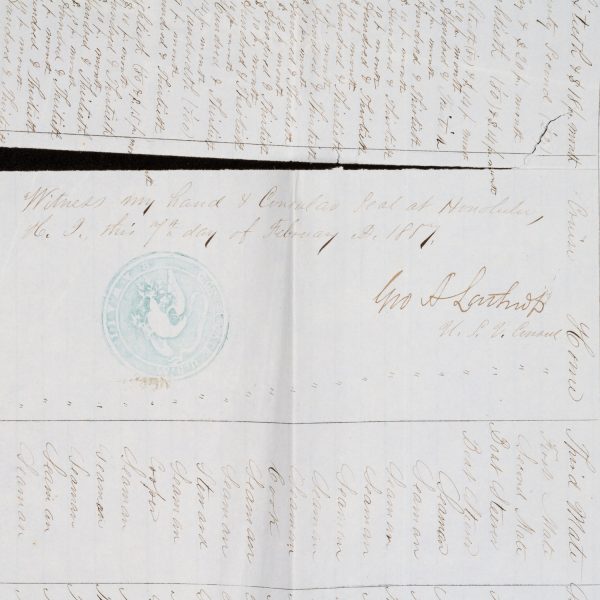 CONSULATE OF UNITED STATES OF AMERICA, FOR HONOLULU, H.I.

[WHALING] Certificate of Shipment of Seamen issued at Honolulu for the whaling vessel “Montpelier” out of New Bedford (Job Macomber, Master). Dated 7 February 1857.

Honolulu, Hawaii : U.S. Consulate, 1857. Lithograph printed document with manuscript entries, 310 x 400 mm, headed ‘Cirtificate [sic] of Shipment of Seamen’ above the American eagle and ‘Consulate of United States of America, for Honolulu, H. I.’; immediately below is the printed declaration with relevant entries supplied in ms.: ‘I, the undersigned, Consul of the United States of America for the port of Honolulu, H. I., do hereby certify that the undermentioned Seamen have engaged on board of the Montpelier, New Bedford whereof Job Macomber is Master, at the date, and on the terms specified below. A condition of these Articles (unless otherwise stated) is that any Seaman of whale ships discharged, shall be paid off at Consular prices, and perform labor on board eight days after the arrival of the vessel in Port.’; the document bears the signature of the U.S. Consul George Alfred Lathrop and the seal of the U.S. Consulate, and is dated 7 February 1857; the document was filled out in manuscript by a consular official across six vertical columns, recording the names of all crew and their dates of shipment, their Lay or Wages, Capacity, and amount of Advance paid to them, with the fourth column Term of Shipment completed as ‘Cruise Home’; central vertical fold (with a lengthy split) and two horizontal folds; the otherwise blank verso with clerical endorsement in pencil ‘Montpelier’ and old tape at top edge; else clean and complete.

Rare and desirable primary source document relating to the American Pacific whaling fleet in the 1850s, when its commercial activity was at its peak.

The New Bedford Whaling Museum holds Job Macomber’s log from the previous voyage of the Montpelier to the North Pacific in 1853-54. Macomber had also earlier served as mate on a longer voyage in the same vessel in 1850-3.

On this homeward voyage from Honolulu to New Bedford in early 1857, the crew of the Montpelier comprised 23 men serving under Macomber: First, Second and Third Mate; two Boat Steerers; 15 Seamen; Steward; Cook; and Cooper.

The column headed ‘Lay or Wages’ is particulary interesting, as it shows the contract terms on which the various crew members were engaged. For example, the First Mate, R. C. Wilson, is to receive a one twenty-second share of profits, whereas the Third Mate, Benjamin Cummings, receives one sixtieth plus a retainer of $18 per month; each of the Seamen is to be paid a one hundred-and-thirtieth share and $10 per month; the two Boat Steerers, John Ellis and John Almeda, receive a one-eightieth share plus $14 per month; and the Cooper, Daniel Thompson, receives a one-eghtieth share and $15 per month.