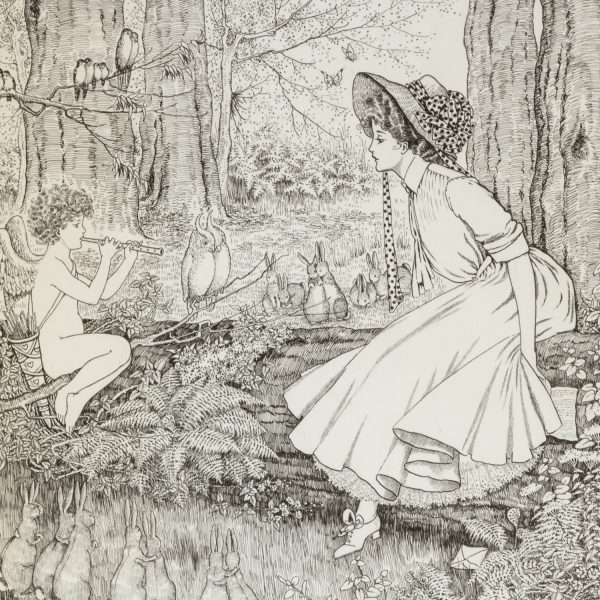 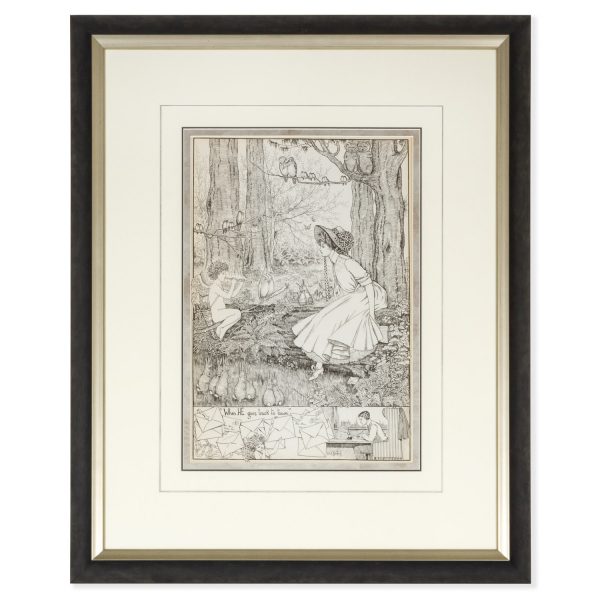 When HE goes back to town

This exquisite drawing is a fine example of Ida Sherbourne Rentoul’s skill with pen and ink, a romantic work drawn at the time of her engagement. Published in the Christmas Number of Perth’s Western Mail just prior to her marriage in December 1909 to Arthur Grenbry Outhwaite, it is one of two works by Rentoul published in that issue of the Western Mail. A review of the publication in the West Australian (Tuesday, 30th November, 1909) comments on the two works:

‘Miss Ida S. Rentoul shows fine work in the “Trials of Young Lovers” – particularly entertaining in view of Miss Rentoul’s marriage next Tuesday to Mr. A. G. Outhwaite – and adopts a more serious vein in “When He Goes Back to Town,” in which she pictures a young lady reading her lover’s letter in the bush to the pipings of a diminutive Cupid, while “he” in his city office is engrossed in sending just such a letter.’

It is perhaps worth mentioning that in the publication, the work is captioned ‘Holiday trials of young lovers‘, perhaps to render more ephemeral any tiff the young lovers might endure.

When HE goes back to town shows a beautiful maiden in an Australian bush setting, a love letter in her hand, being seduced by the pipe of Cupid. Surrounding the girl are pairs of birds and animals sharing the moment of love, koalas in the trees, rabbits on the forest floor, kookaburras on the branch. Set in a vignette along the lower border is a series of love letters addressed to ‘Miss …’ (illegible), with a insert of a handsome young man writing at his desk. The scene is filled with romance, and drawn with the skill and finesse which made the artist one of the most revered illustrators in Australian art.

Completed shortly after the publication of the artist’s first books, When HE goes back to town was presented as a gift to Chrissie Robertson circa 1912 and retained in her family’s collection for nearly a century.

Gifted by the artist to Chrissie Robertson circa 1912.