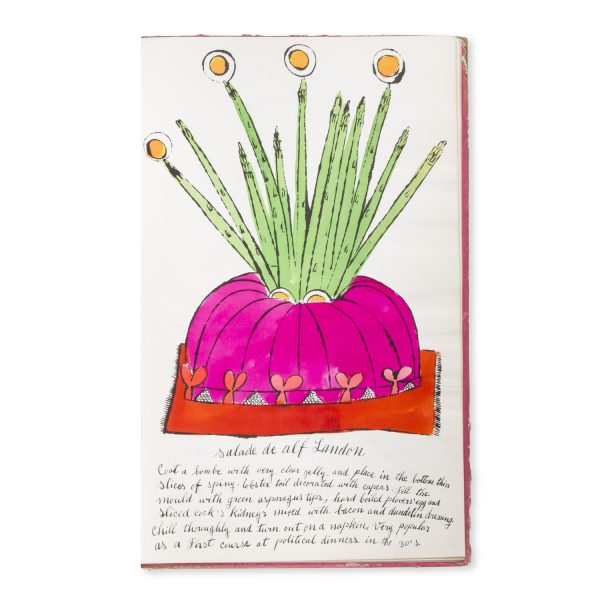 One of Andy Warhol’s early hand made artist’s books, a satirical take on the French cookbooks popular at the time, written in jest with socialite friend Suzie Frankfurt, the recipes scripted by Andy’s mother Júlia Warhola and illustrated by Andy Warhol, then hand coloured with Dr. Martin’s dyes under the artist’s supervision and bound in Manhattan.

After seeing an exhibition of the young Warhol’s work at Serendipity ice cream parlor on the Upper East Side, the beautiful young Californian Suzie Frankfurt sought the artist out and a friendship quickly developed. Being recently married to an advertising executive, Suzie’s mother had sent her a series of French cookbooks so in vogue in the fifties, which were filled with recipes and ingredients quite foreign to young Americans. “My mother, who was a hostess sine qua non, deemed the most important thing for a new bride was to be a good hostess. I wanted to emulate my mother, of course, and it was the year all these French cookbooks came out. I tried to make sense of them. ‘Make a béchamel sauce,’ they’d say. I didn’t even know what that was.” Inspired by the recipes that were a source of mirth and mystery to Suzie and Andy, the two decided to write their own cookbook of exotic, elaborate and improbable recipes.

Make a bed of genoise and fill it with pink ice.

Cover with a meringue and set to brown quickly.

When about to serve pour a glass of heated kirsch

into the meringue and light it. Always to

be eaten alone in a candlelite room”

A receipt in the Andy Warhol Museum Archives shows that 94 copies were bound by A – Z Bookbinding at the corner of Canal Street in the Lower East Side for a total amount of $94. The title “Wild Raspberries” is a spoof on the 1957 Ingmar Bergman film “Wild Strawberries” and the book includes many spelling mistakes made by Warhol’s mother, who is described by Frankfurt as ‘gifted and untutored’, deliberately left in the book, a fact which adds to its naïveté. The hand colouring was applied by four schoolboys who lived in an apartment above Warhol’s. In a step towards Warhol’s ‘Factory’ of the 1960s, they created the finished artworks under his direction. According to Frankfurt, 34 copies were coloured in entirety, and the bulk of the remainder assembled with 5 coloured sheets, enriched using Dr. Martin’s aniline dye which would be recognised as one of Warhol’s trademark mediums. This example has a single leaf coloured, indicative of the ad hoc hand made nature of the publication. “Apparently part of the edition was completely hand-colored, but most of the copies were hand-colored only in part, for the most part on the first pages’ (Reading Andy Warhol).

Andy Warhol’s “Wild Raspberries” show ran from December 2 – 24, 1959 at the Bodley Gallery and featured original watercolours from the series as well as copies of the book for sale. The exhibition and book received positive reviews (‘clever frivolity in excelsis’ – The New York Times; ‘Noël Provincial’ – Harper’s Bazaar), but the book sold poorly, with only a few copies selling at the exhibition and also at the department store Bloomingdales. Many copies were given away as a consequence, and a number have now been split by art dealers and the prints sold individually.

The copy we offer here was presented with a signed inscription to Japanese artist Susumu Ikuta and an unidentified ‘Bobby’ probably from around the date of publication. A portrait study of Ikuta by Warhol is held in the Akland Art Museum, University of North Carolina at Chapel Hill.