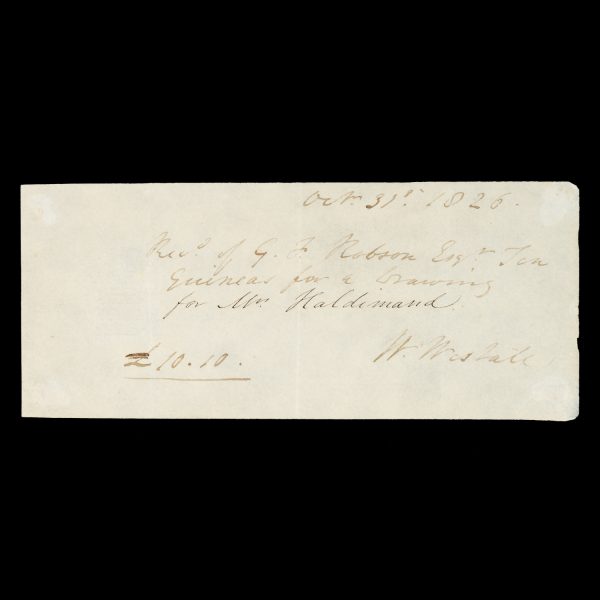 Rare autograph document of William Westall (1781-1850), one of the first European artists to work in Australia.

As a very young man, Westall served as artist for Matthew Flinders on his voyage of circumnavigation of New Holland in the Investigator (1801-03). In his later career in England he established himself as a successful landscape artist.

For a brief biographical sketch of Westall, see the DAAO.

The purchaser of Westall’s drawing, Mrs. Sophia Haldimand (née Prinsep, d. 1861), was the wife of London financier and property developer George Haldimand (1781-1850), whom she had married in 1807. Haldimand was a partner in the syndicate responsible for building Belgrave Square, which is where the couple resided for most of their married life.

The Haldimands were both passionate collectors and patrons of the arts. In 1826 Sophia commissioned the watercolourist George Fennel Robson – who is named on Westall’s receipt – to assemble for her an album of  watercolours by leading British artists of the day. By 1828 Robson had compiled the Haldimand Album, containing 100 commissioned works by 99 artists, including Westall, J. W. M. Turner and John Constable. Although the subjects were mainly landscapes, the album also included still life, historical and genre paintings. The works were commissioned to conform to a standard small format of around 18 x 25 cm, and Sophia Haldimand had a rosewood table and integral drawer specially designed to house the album; the table had a rising top on which the album could be easily displayed. Ten guineas was reportedly the upper limit for any work acquired by Robson on Mrs. Haldimand’s behalf – testament to the esteem in which Westall was held as an artist.

The Haldimand Album was sold after Sophia’s death in 1861 for £1500. It resurfaced again in 1883 with the London art dealer, Vokins, who had the works remounted. The collection remained substantially intact for almost another century: in 1980, the 97 surviving paintings from the album were sold, individually and in small groups, by Christie’s.