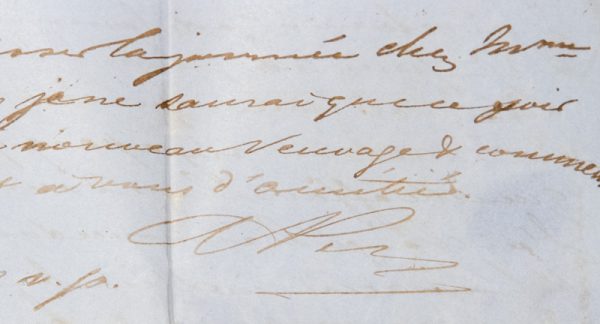 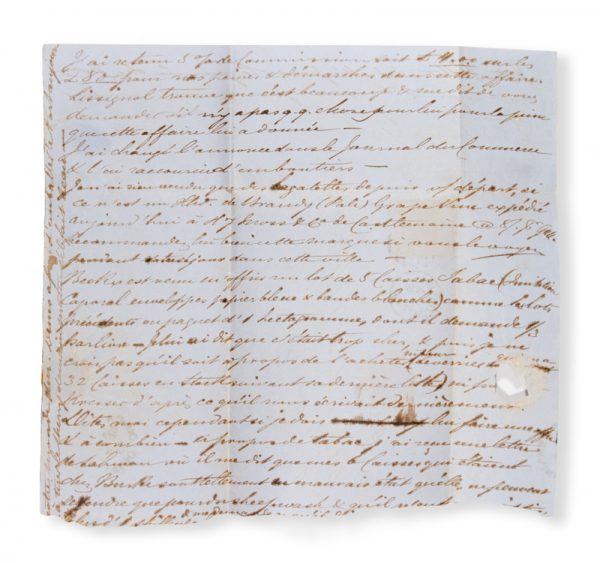 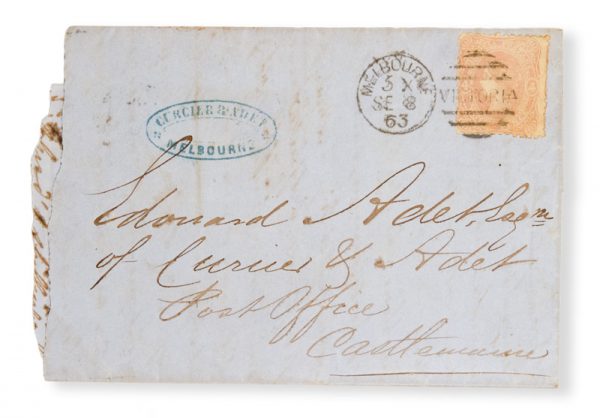 Entire letter (single folded octavo sheet of blue writing paper), addressed to Edouard Adet Esq., Curcier & Adet, Post Office, Castlemaine, the addressed side franked with 4d stamp of the Colony of Victoria and postmarked Melbourne SE 8 63, with rubber cachet in blue of Curcier & Adet, Melbourne, arrival cancel of Castlemaine Victoria SE 9 63 on reverse, along with remains of wax seal, message written in French over one-and-a-quarter sides, signed by one of Adet’s business associates, whose identity is not certain (although the signature looks tantalizingly like de Pury); the letter was roughly opened by Adet, resulting in partial loss of one line of the message; otherwise, the letter is clean and legible.

The Bordeaux wine merchant and importer Edouard Adet (1829-1903) arrived in Melbourne around 1857, where, as a partner in the firm Curcier & Adet, he managed the company’s activities in Port Phillip. Adet was one of the most prominent and respected figures in Melbourne’s French community. Along with fellow wine merchant Frédéric Kresser and photographer Antoine Fauchery he quickly became one of Comte Lionel de Chabrillan’s trusted inner circle of associates (de Chabrillan was the first French consul in the Colony). A photographic portrait of a gentleman by Fauchery published in Fauchery and Daintree’s Sun Pictures of Victoria (1859) is generally considered to be that of Adet (see State Library of Victoria, image H84.167/​41). On de Chabrillan’s death in December 1858, Adet was appointed executor of his estate and succeeded de Chabrillan as French Consul, the first of several such interim appointments. All the while, Adet ran a highly successful wine and spirits business: Curcier & Adet is listed in Melbourne directories from 1857 to 1866.

The letter we offer here was clearly intended to keep Adet informed of how the business was going in Melbourne while he was visiting Castlemaine and possibly nearby townships on the goldfields. The railway line from Melbourne had reached Castlemaine the previous year, so mail delivery was speedy and Adet was able to collect the letter at Castlemaine post office the day after it was sent. It contains references to both Frédéric Kresser and Emanuel Lissignol. Lissignol was another highly respected member of the French community in Melbourne, who was to be chosen to make translations for French publications of a number of key scientific essays by von Mueller, Selwyn, Brough Smyth, McCoy, Archer and Bleasdale which were written for the Intercolonial Exhibition of 1866-67.

‘… I have returned 5% of the commission, being 4 pounds on the 80 pounds for our troubles and costs in this matter. Lissignol believes that it’s a lot and tells me to ask you whether there is not something for him for the headache this business has given him. I have changed the advertisement in the Journal de Commerce … I have sold only small things since your departure [apart from a consignment of] Brandy (Pale) Grape Vine dispatched today to H.J. Moss & Co. of Castlemaine … I recommend that you go and see this merchant during your stay in that town. Beck’s has just offered a lot of 5 boxes of tobacco … Caporal wrapped in blue paper and white bands, like previous lots in 1 hectagramme packets, for which he is asking 1/3d per piece. I told him that’s too expensive, and moreover I don’t believe he would agree to buy them … Levessier … [has] 32 cases in stock following his … [purchase from] Kresser, according to what he wrote us … Tell me if I should make him an offer, and at what price. Regarding tobacco, I received a letter from Lehman where he tells me that the 6 boxes which were at Burke’s are in such bad condition that they cannot be sold except as sheep wash … Madame Pelletin has gone to spend the day with Madame Adet today, but I [do not know] how she bears this recent widowhood and how les Misches are coping … With kind regards [signature]. My regards to Guillan if you please.’