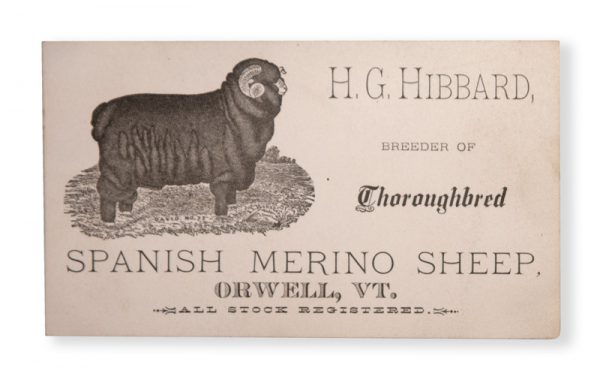 Having fiercely protected its merino bloodlines from foreign powers for so long, Spain had relinquished its monopoly on the hugely lucrative merino wool industry by the early 1800s. Merinos were introduced into Australia via the Cape in the late 1790s, and with the encouragement of Sir Joseph Banks, John Macarthur and Samuel Marsden laid the foundations of the industry which has generated an incalculable amount of wealth in Australia.

Merino sheep were introduced into Vermont around 1812, and were from different bloodlines to those imported into Australia. By 1835, the merino population in Vermont numbered over one million, close to half the number of merinos which were in Australia at around the same time. During the 1880s, by which period Australia had become the world’s leading wool producer, many Australian breeders imported merino rams from Vermont in the belief that the introduction of new bloodlines would improve the quality and yield of their wool. However, this large scale speculation proved to be an unmitigated disaster, with the high grease content in the wool of the Vermont bloodlines making the sheep susceptible to fly strike. The new breeds also produced inferior quality wool and fewer lambs. This combination of factors caused many Australian stud farms to fail, and eventually importation of the Vermont bloodlines petered out. By the early Federation period, the local Peppin and Murray bloodlines had re-established the supremacy of Australia’s merino wool industry.

This business card belonging to a Vermont breeder has a tangible connection with the history of merino breeding in Australia, symbolising as it does the unforeseen and serious threat which the newly introduced Vermont bloodlines posed to the Australian industry in the 1880s.