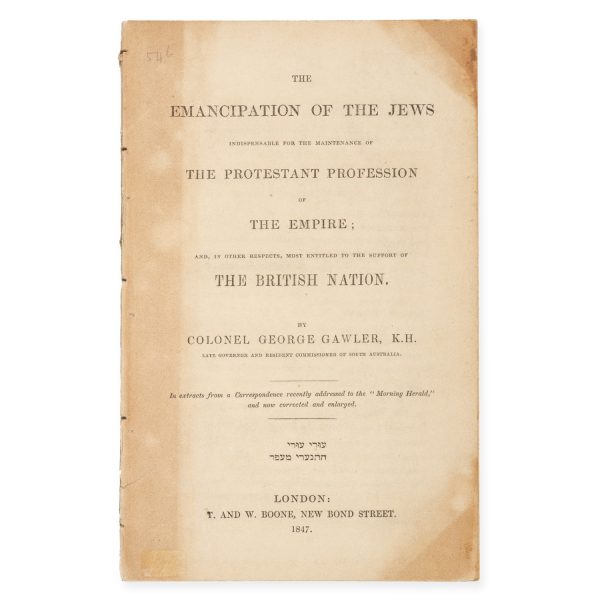 [ZIONISM] The emancipation of the Jews, indispensable for the maintenance of the Protestant profession of the Empire ; and most entitled to the support of the British Nation.

Lieutenant-Colonel George Gawler (1795-1869) served as the second Governor of South Australia from October 1838 until May 1841. After his retirement in 1841, Gawler returned to England and devoted himself to religious and charitable works. One of his abiding and deep interests was the welfare and fair treatment of the Jews by peoples and governments of other faiths. He published a number of tracts in relation to this topic, including The Tranquillization of Syria and the East (1845), in which he promulgated the idea that Jews be allowed to establish autonomous agricultural settlements in Palestine as recompense for their suffering under Ottoman rule; The Emancipation of the Jews (1847); and Syria and its Near Prospects (1853). He also toured Palestine in 1849 with Moses Montefiore, the British financier and philanthropist.

For a gentile writing in the 1840s, Gawler must be considered something of a visionary. His public and strident advocacy for Jewish rights, including agitation for protected settlements in Palestine, prefigured the political Zionism of Herzl by half a century.

‘No conclusion can be more ill-founded than that which a considerable number of estimable persons have adopted, that, in regard to the Protestant Christianity of the British Empire, the admission of Jews to the Legislature would be a step from bad to worse. Altogether in the opposite direction, it would be, even in the foregoing relation, a step from bad to very much better … First, it would be part payment of a heavy debt of retribution that England owes to the Hebrew race, for bye-gone centuries of cruelty and oppression. Westminster Abbey itself, was rebuilt by money extorted from the Jews. And secondly, it would be taking a part, which is to the honour and interest of the British nation to perform, in assisting in the great movement of deliverance from oppression and bondage, that for many years past has been in operation throughout the whole civilized world, in behalf of the Ancient People of God.’ (Introductory Remarks, p. iii)