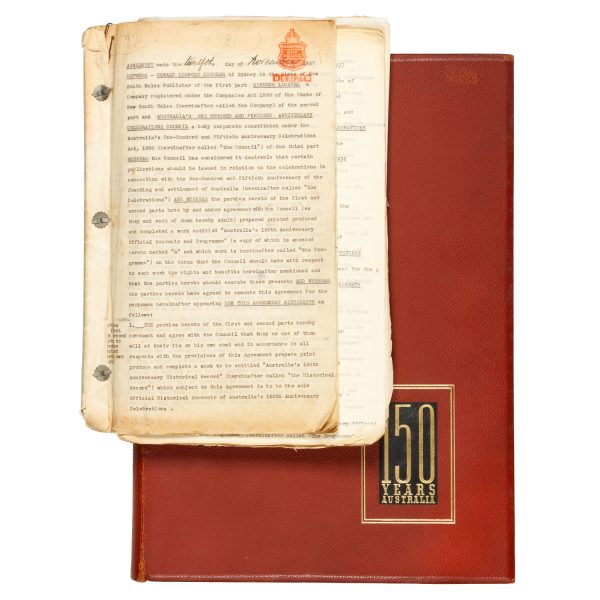 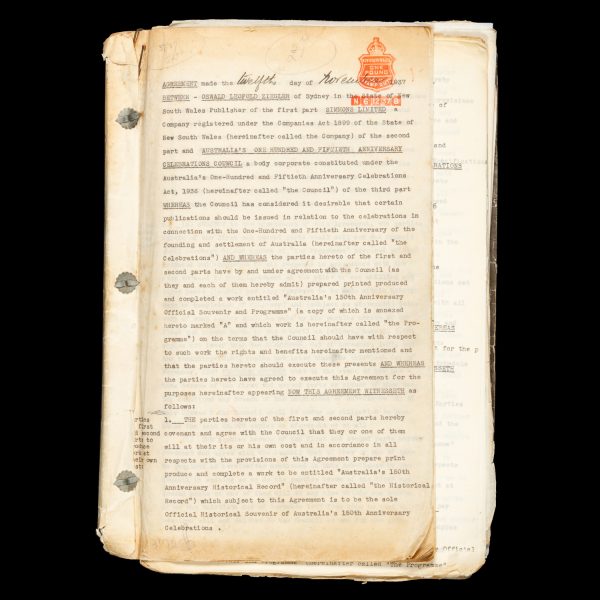 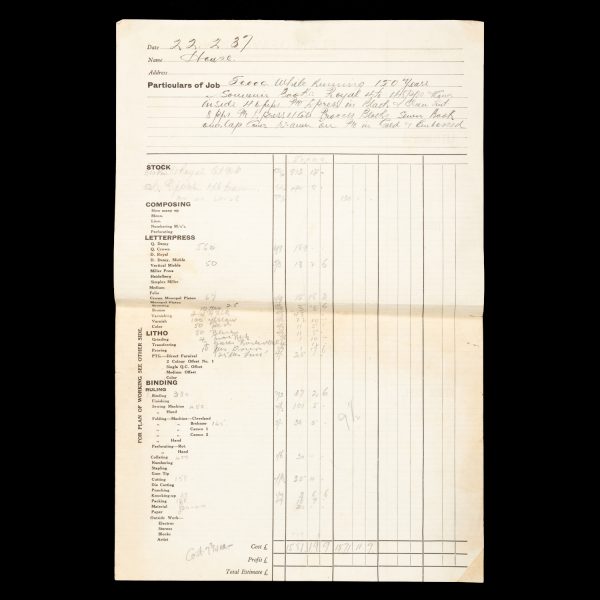 Australia 1788-1938. (With an archive of unique ephemera associated with Ziegler’s publications for the Sesquicentenary)

Sydney, N.S.W. : Simmons Limited, 1938. “Produced by Oswald L. Ziegler under the authority of Australia’s 150th Anniversary Celebrations Council and in collaboration with its publicity committee.” (title page). Elephant folio (440 x 310 mm), publisher’s tan leather over boards (lightly rubbed and marked), upper board with black leather panel lettered in gilt 150 Years; all edges gilt, marbled endpapers, pp [332], photographic illustrations throughout (including colour photographs by Frank Hurley); Introduction by His Majesty King George VI; Foreword by J. A. Lyons, Prime Minister of Australia; contents pristine; lacking the slipcase. [WITH] A small archive of unique ephemera relating to both this publication and Ziegler’s 150 Years in Australia souvenir programme (which was also produced for the Sesquicentenary celebrations), including: 1. Simmons Limited’s Particulars of Job and Plans of Working sheets (in total 16 pp, folio) for Australia 1788-1938 and 150 Years in Australia, dated November 1936, February and March 1937, and January 1938, containing highly detailed handwritten printing specifications for the larger publication (5000 copies) and the programme (25,000 copies); 2. Typed letter, (1 page, foolscap folio), Sydney, 5 November 1936, Australia’s 150th Anniversary Celebrations Council to Oswald Ziegler, informing him of the Council’s committment to purchase 25,000 copies at 1s 3d per copy of 150 Years in Australia, with the right to place further orders of 5000 or more, at the same price; 3. Handwritten letter (4 pp, quarto), Alexander Hotel, Spencer Street, Melbourne, 6 April 1937, Oswald Ziegler to Mr. Deacon of Simmons Limited discussing Ziegler’s commissions and printing arrangements; 4. Original of the contractual agreement (13 pp, foolscap folio, typescript), 12 November 1937, between Oswald Leopold Ziegler, Simmons Limited and Australia’s One Hundred and Fiftieth Annversary Celebrations Council for the two publications Australia 1788-1938 and 150 Years in Australia, with signatures and the Common Seal of the Council (plus four unsigned copies); 5. Undated copy of letter (provided to Simmons Limited) to the Manager of the AMP Society signed by Oswald Ziegler, stating that ‘Simmons Ltd. hereby states that it has an assurable interest in the life of Oswald Leopold Ziegler to the extent of at least £3000 and would be at pecuniary loss of at least this amount in the event of his death by reason of the loss of his specialised services and the cost of securing someone to replace him’; 6. Sundry handwritten files pertaining to advertising and to the Australian Government’s pre-publication committments to overseas distribution of copies of Australia 1788-1938.  7. Simmons Limited’s “legal” copy of 150 Years in Australia (the official souvenir programme) with annotation to front cover recording that this is the publication referred to under Annex A. in the contractual agreement between Simmons, Ziegler and the Council.

From the 1920s to the 1970s, Oswald Ziegler was unarguably the most prominent Australian publisher of promotional publications. Many of his successes were collaborations with major Australian photographers, his magnificently produced Australia 1788-1938 being no exception, as it features the colour photographs of Frank Hurley. The unique ephemera that accompanies the present copy came from the archives of the book’s printer, Simmons Limited, and it provides valuable behind-the-scenes insights into how such a significant publishing venture, marking such an important occasion in the young history of Australia’s European settlement, was accomplished.

Description from the Sydney Morning Herald Tuesday, 27 September 1938: ‘… a magnificently produced volume, which, as the Prime Minister, Mr. Lyons, states in his foreword, should be a valuable souvenir for everyone who has been associated – whether as a spectator or as an actual participant – with the celebrations commemorating the 150th Anniversary of the foundation of Australia. The volume is a worthy record in photographs – many of them in colour – and letter-press, of the progress and achievements of the Commonwealth….’