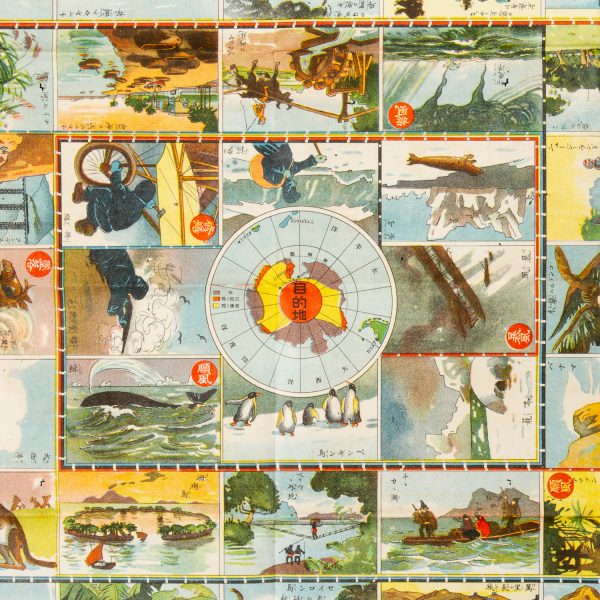 [= Boardgame of the Antarctic Expedition by plane]. Tokyo : Jitsugyo no Nihonsha, 1911. Folded colour lithograph sheet, 730 x 540 mm, with illustrations by Akashi Sekish; together with the original playing markers with aeroplane designs printed on red, blue, yellow and white paper; a few insignificant insect holes (only noticeable when held to the light), otherwise the condition is superb.

Sugoroku boardgames were popular in Japan from the Edo period onwards. In the early twentieth century the games frequently adopted themes from current events, politics, culture and sports. In this dice game of Polar exploration each of the four players represents a different power: Japan, Germany, France, or the United States. The players start in Tokyo, Berlin, Paris and New York (located at the four corners of the board), and race each other to the South Pole, with penalties for hazards en route. The illustrated playing squares include one each for New Guinea (lakatois) and Australia (kangaroos).

The game, which was published as a supplement to the popular children’s periodical, Nihon Shonen (Japan Boy), was very much a product of the Zeitgeist, and no doubt much of its inspiration came from the 1910-1912 Japanese Antarctic Expedition led by Nobu Shirase. However, the publishers of the game would have had no knowledge of the outcome of Shirase’s expedition, which did not reach Antarctica until the Autumn of 1911, nor of Norwegian explorer Roald Amundsen’s success in being the first to reach the Pole on 14 December 1911, five weeks ahead of the British party led by Robert Falcon Scott as part of the Terra Nova Expedition.