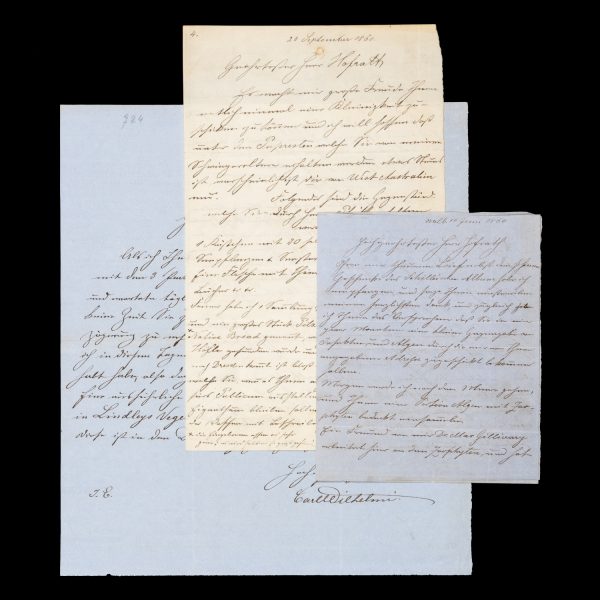 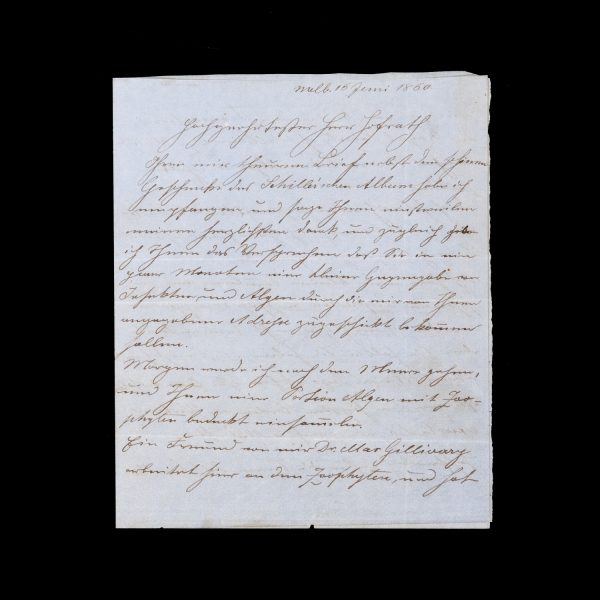 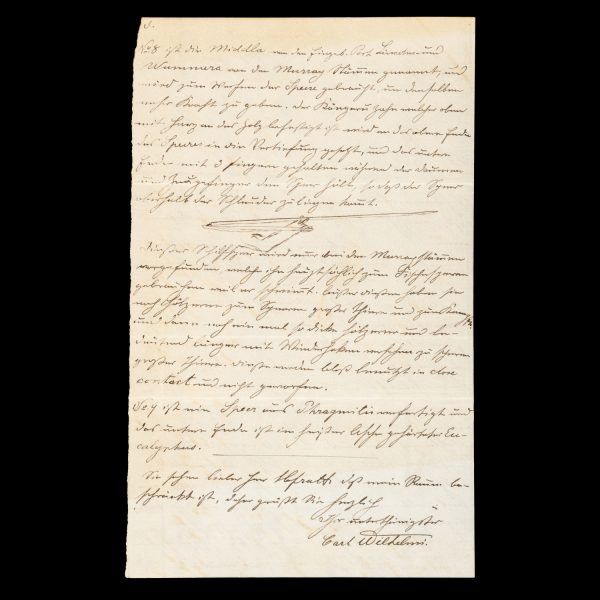 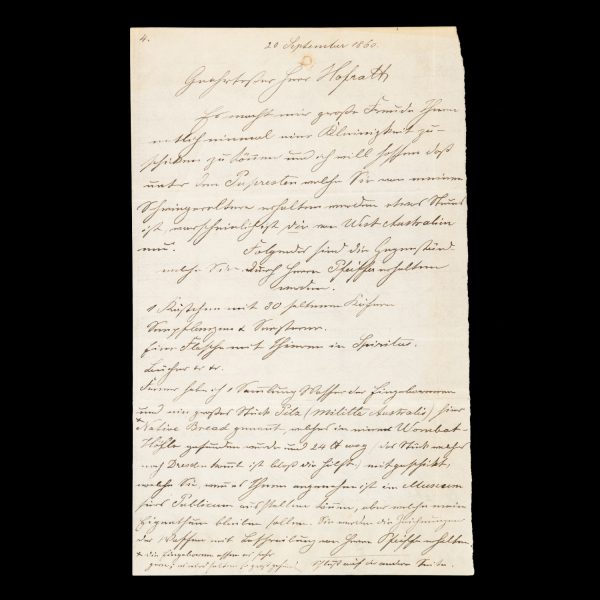 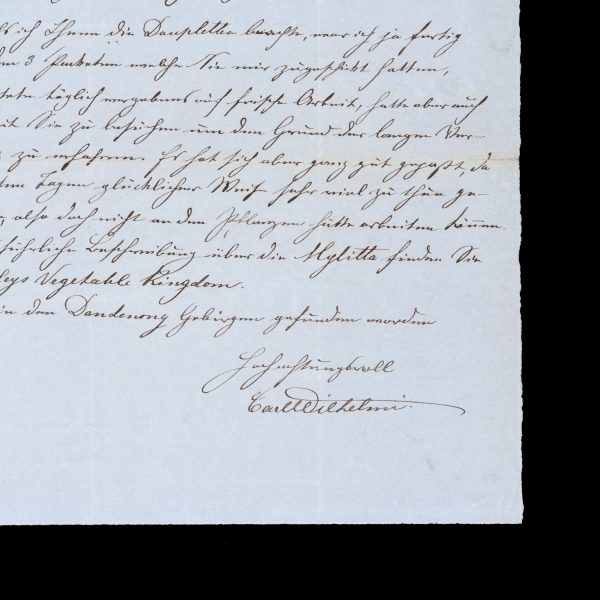 Carl Wilhelmi (1829-1884), German seedsman and botanical collector, arrived in Adelaide in March 1849, having been sent out to South Australia by the Dresden Lutheran Missionary Society. During his almost twenty-year sojourn in Australia, he made major contributions in the fields of both botanical science and anthropology.

Early on, Wilhelmi collected botanical specimens extensively throughout South Australia, in particular along the lower Murray River to its mouth (1849-1851), on the Eyre Peninsula (1851) and in the colony’s southeast (1853). He moved to Melbourne in 1854, where his scientific knowledge and connections saw him appointed Acting Government Botanist while von Mueller accompanied Gregory’s expedition overland from Moreton Bay to Port Essington in 1854-55. He would retain his position as von Mueller’s assistant up until his departure from Australia in 1869. In Victoria Wilhelmi collected in the Yarra Ranges, Western District, Wimmera and Pyrenees regions, as well as in Gippsland. In 1863 he visited New South Wales and made collections at Port Jackson. The largest collection of Wilhelmi’s Australian plants is held in the National Herbarium of Victoria, Melbourne. The plants Acacia wilhelmiana and Verticordia wilhelmii are named after him.

In the early 1850s Wilhelmi also served as assistant Protector of the Poonindie Mission on the Eyre Peninsula, where he developed a deep interest in Aboriginal culture. His first-hand observations of and insights into Aboriginal society and material culture – both in South Australia and later in Victoria – were valued and cited by writers such as Brough Smyth. In 1860, he read a paper before the Royal Society in Melbourne which was published in 1862 as Manners and customs of the Australian natives (Ferguson, 18559).

The three Wilhelmi letters in this group appear to have been written to a Councillor (Hofrath or Geheimrath) in Dresden. The earlier two, one of which contains a small sketch illustrating how a woomera (spear-throwing device) is used – were written in Melbourne in 1860, while the latest one dates to 1871, after Wilhelmi’s return to Dresden. The letters are written in Kurrentschrift (the old form of German cursive), entirely in Wilhelmi’s neat hand, with his signature at the foot; all are complete, clean and legible.

I. Melb[ourne], 16 June 1860. Square duodecimo, 125 x 105 mm, 3 pp; manuscript in ink on blue paper. Signed C. Wilhelmi. Wilhelmi thanks his correspondent for sending him the Schiller album (marking the celebrations for the Schiller anniversary). He promises to send insects and algae in a few months in return. “… Tomorrow I will go to the Murray and I will collect [specimens of] algae and zoophytes for you. A friend of mine, Dr. [Paul Howard] MacGillivray, works here on the zoophytes, and has published a lot about the subject in the Transactions of the Royal Society of Melbourne, which you will receive when I send you the algae. I also have some parasitic orchids from N. S. Wales, which I intend to include for your son in Leipzig. I have a small collection of the beautiful remains of pupae [chrysalises], about 28 different ones, which I do not really want to part with, but you shall have them; it is possible that there is something new among them. One of these is from the far north of Western Australia, a magnificent creature. Hopefully the seeds of the Clianthus Dampierii will sprout well in the Botanical Garden, here they grow like weeds as soon as the seeds are soaked in water….”

II. [Melbourne], 20 September 1860. Octavo, 203 x 125 mm, 2 pp; manuscript in ink on white paper. Signed Carl Wilhelmi. Wilhelmi announces the dispatch of “1 box with 30 rare beetles, sea plants and starfish, a bottle with animals in Spititus, books etc. I also have a collection of weapons from the natives and a large piece of mushroom (Myilitta australis) here called Native Bread (the natives like to eat it, it is rarely found that big) which was found in a wombat cave … (the piece that comes to Dresden is barely half of the original), which you can exhibit in the museum for the public if you like, but which should remain my property. You will receive the drawings of the weapons with a description from Mr. Pfeiffer. No. 8 is the Middla from the natives of Port Lincoln – called Wummera by the Murray tribes, and is used to throw spears to give them more power. The kangaroo tooth, which is attached to the top of the wood with resin, is attached to the top of the spear in the recess; the lower end is held with 3 fingers, while the thumb and forefinger hold the spear so that the spear comes to rest above the sling [this is illustrated by Wilhelmi with a small pen and ink sketch]. This reed spear is only found among the Murray tribes, who mainly use it for spearing fish… Besides these they also have wooden ones for spearing large animals and for fighting…. ”

III. [Dresden], 7 October 1871. Quarto, 225 x 195 mm, 1 p. Signed Carl Wilhelmi. This letter deals with plant exchanges with the correspondent, which Wilhelmi is to determine in each case. He had been waiting for “fresh work” from the addressee, but had so much work to do. “… A detailed description of the Mylitta [australis] can be found in Lindley’s Vegetable Kingdom. It was found in the Danderong Mountains ….”