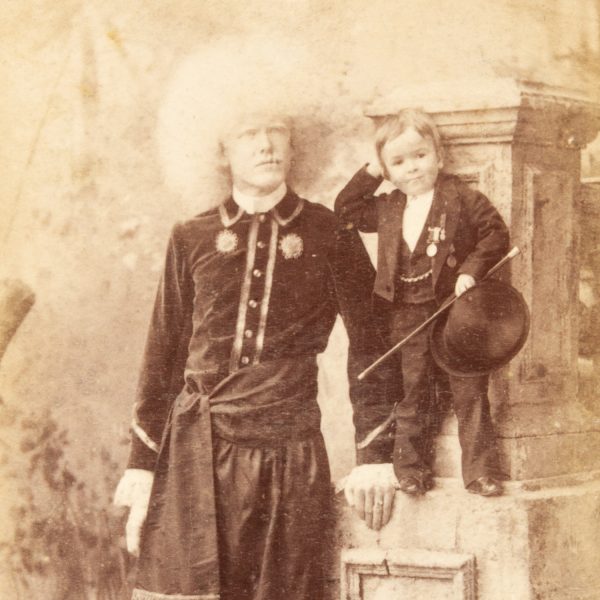 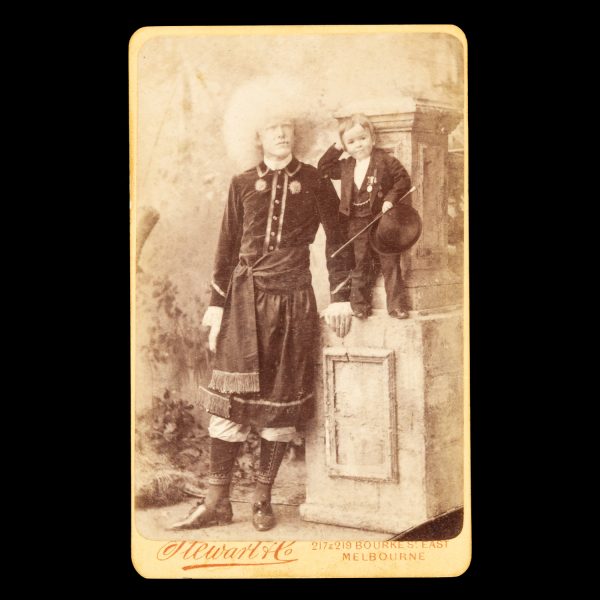 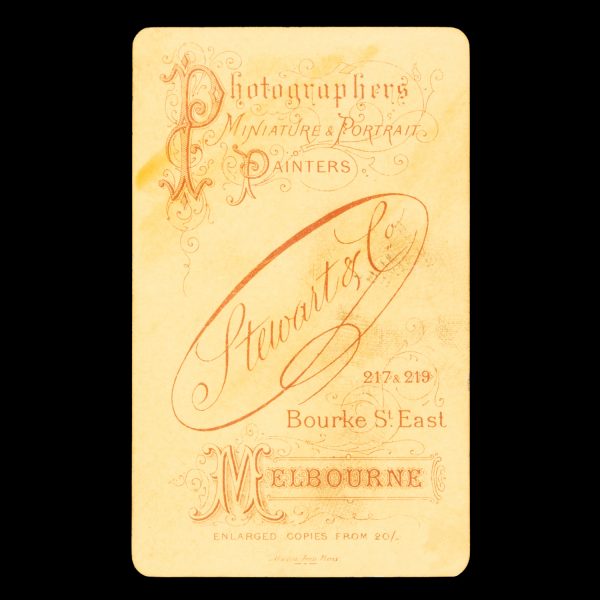 In 1886, when this photograph was taken in Melbourne, Unzie – an albino man – was being exhibited to the public as an exotic Circassian, who hailed from the Caucasus region; in 1890, in the United States, he would be toured and promoted as an “Aboriginal beauty from Australia” (see below).

Trove locates no photographs of Unzie taken in Australia, and only one studio portrait of him taken in the United States in the 1890s (Monash University Library).

From The Maitland Mercury and Hunter River General Advertiser, 8 August 1886:

‘THE MIDGET AND CIRCASSIAN YOUTH. THE NEW ZEALAND TOM THUMB (W. E. JACKSON)—Height, 30 inches; weight, 19 lbs.; age, 15 years. The Queen’s smallest subject. The smallest perfectly-formed Midget ever exhibited. “Witty, entertaining, and refined. Visited during his New Zealand tour by over 150,000 persons. Also, THE CIRCASSIAN YOUTH (UNZIE KHOURT), 19 years old, with wonderful head of pure white hair (4 feet in circumference), and pink eyes. These unique wonders were exhibited in Sydney for over 3 months, and were visited by upwards of 80,000 persons. Open afternoons (for the convenience of ladies and children), from 2 till 5 ; Evenings, from 7 till 10. Prices of admission, 1£; Children under 12, 6d.’

From the Melbourne newspaper, The Herald, 26 October 1886:

A pamphlet by American sideshow promoter, Nicholas Forster, Wonder of the nineteenth century : Unzie, the Aboriginal beauty of Australia, was published in San Francisco around 1890.

‘According to this biography, apparently published shortly after his arrival in the United States in 1890, Unzie was an Aborigine born in 1868 in Tarrabandra (near Gundagai), New South Wales. When he was born he had “snow white hair, skin like alabaster, and a few front teeth,” and was supposedly worshipped by his people as a “special dispensation from heaven,” until twelve years later when he was kidnapped by an Englishman and taken to Melbourne where he was educated. Forster states that Unzie was first exhibited in public in 1886. In American sideshow: an encyclopedia of history’s most wondrous and curiously strange performers (2005), Marc Hartzman describes Unzie as “the most famous of the sideshow albinos” and considers it “unlikely that Unzie was an Aborigine.” He cites an 1895 explanation for his billing as “a respectable ambassador for his supposed people” from the Fort Wayne, Indiana, Gazette: “It has hitherto been believed that the lower specimen of the human race was the Australian Aborigine. A curious contradiction of this theory is found in the presence of an intelligent, well-educated Australian native in this country. Except in the contour of his features he resembles his race in nothing.” Unzie also had hypertrichosis and was considered remarkable for his “great mass of snow white hair which stands out all around his head like an open umbrella, measures six feet in circumfrence, it is elastic, crispy, and electric, it is full of life and grows profusely…” (page 7). In an October 1887 New Zealand appearance, Unzie is reported to have sung several songs and played “Home, sweet home,” with variations, on the violin, which may explain the presence of song lyrics in this pamphlet. Nicholas Forster, the author of this pamphlet, also managed the Russian sideshow performer Fedor Jeftichew (1868-1904), better known as Jo-Jo the Dog-Faced Boy. Forster writes that he met Unzie while exhibiting Jo-Jo in Melbourne, and then brought them both to the United States in April 1890.’ (National Library of Australia)