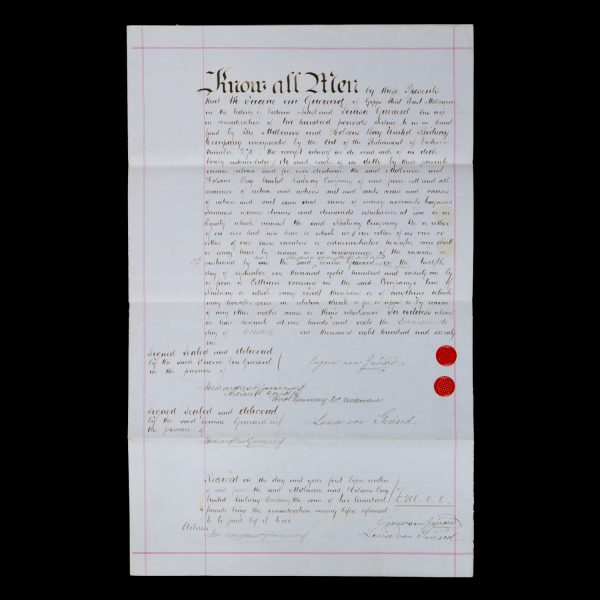 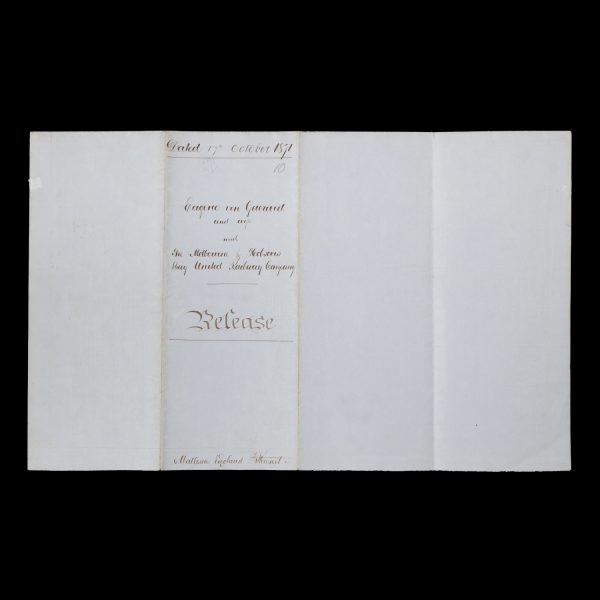 Eugene and Louise von Guérard : a deed of release document bearing the signatures of the artist and his wife, dated October 1871.

On the evening of 12 September 1871 the colonial artist Eugene von Guérard and his wife Louise were passengers on a train which was involved in a collision as it was returning to Flinders Street from Prahran. Ironically, the accident took place only a short distance from their residence in East Melbourne. The injuries both sustained were deemed significant enough to warrant an out-of-court settlement with the Melbourne & Hobsons Bay United Railway Company for £200 in compensation – a very substantial sum of money. The legal document offered here is a deed of release (probably one of two copies) prepared by the Railway Company’s solicitors, Malleson England & Stewart; by signing it, the von Guérards absolved the Company of any further liability and acknowledged receipt of its compensation payout. The deed is signed in full, twice, by both of the von Guérards.

‘Know all Men by these Presents that We Eugene von Guerard of Gipps Street East Melbourne in the Colony of Victoria, Artist, and Louisa [sic] Guerard his wife, in consideration of two hundred pounds sterling to us in hand paid by the Melbourne and Hobsons Bay United Railway Company incorporated by the Act of Parliament of Victoria Number 270 (the receipt whereof we do and each of us doth hereby acknowledge) do and each of us doth by these presents remise release and for ever discharge the said Melbourne and Hobsons Bay United Railway Company of and from all and all manner of action and actions suit and suits cause and causes of action and suit sum and sums of money accounts trespasses damages wrongs claims and demands whatsoever at Law or in Equity which against the said Railway Company We or either of us ever had now have or which we or our either of us our or either of our heirs executor or administrator hereafter, can shall or may have by reason or in consequence of the injuries sustained by us the said Eugene von Guerard and Louisa [sic] Guerard on the twelfth day of September one thousand eight hundred and seventy one by or from a Collision occuring in the said Company’s line of Railway or which may result therefrom or of anything which may hereafter arise in relation thereto or for or upon or by reason of any other matter cause or thing whatsoever In witness whereof we have herewith set our hands and seals the Seventeenth day of October one thousand eight hundred and seventy one. Signed Sealed and delivered by the said Eugene Von Guerard [his full signature, ‘Eugene von Guérard’] … Signed Sealed and delivered by the said Louisa [sic] Guerard [her full signature, ‘Louise von Guérard’] [witnessed by James Douglas Ramsay, Article Clerk for Robert Ramsay, Solicitor, Melbourne]. Received on the day and year first before written of and from the said Melbourne and Hobsons Bay United Railway Company the sum of two hundred pounds being the consideration money before expressed … [full signatures of ‘Eugene von Guérard’ and ‘Louise von Guérard].

An account of the train accident was published in The Argus the following day, 13 September 1871:

‘A very serious accident happened last night about a quarter past 10 o’clock on the Melbourne and Hobson’s Bay Railway. From what can be gathered (for the railway officials refuse to give the slightest information), it seems that the 10 o’clock train from Windsor was waiting at the usual place, opposite the bottom of Spring-street, for the signal to proceed, when an unattached engine, driven by a man named Duncan M’Farland, reputed to be a cautious driver, came up behind at full speed, and ran into the stationary train. The last carriage was a first-class one, full of passengers, and so great was the force of the collision that the carriage was smashed up, the glass windows being shattered, and the doors broken open, some of them overlapping by nearly six inches. The persons in the carriage were thrown violently all in a heap, and many of them sustained very serious injuries. Among the occupants of the carriage were several ladies, who, besides being injured by the concussion, were nearly all in hysterics from extreme fear when the train arrived at the station. The second carriage from the end was the smoking- carriage, which was also greatly shattered. There were not many persons in this carriage, but one of them, a Volunteer, is reported to have suffered greatly from injury to the spine. The occupants of the other carriages were also much shaken, but generally in a less degree than those in the last two carriages. The cause of tho collision is at present unknown, though it is generally believed to have occurred through there being no danger light or tail lamp at the end of the train. Several persons who were in the train state it as their opinion that the stoppage at tho east side of Swanston-street lasted fully 10 minutes before the collision occurred. In any case, the occurrence of such an accident in close proximity to the principal station, and with so few trains running, would indicate gross negligence on the part of the engine-drivers, or a very defective system of signalling. Most of the injured persons were removed to their houses, and thus we are unable to give anything like a full account of the extent of the damage done. Only one person, Mrs. Jane Lake, was taken to the hospital, where it was found that she was suffering from a severe contusion on the left foot, occasioned by being thrown against the seat opposite to that she was sitting on. Her injuries were attended to, and she was sent home after recovering from the effects of the shaking she had received. Mr. England, brother of Mr. E. England, of the firm of Malleson, England, and Stewart, was in the last carriage, and was so much injured that it was a considerable time before he could be removed from the station. He was taken the London Tavern, and it was found necesary to call in a doctor before he could be sent home. The remains of the tail lamp were found after the collision occurred, and the whole question as to who should bear the blame of the accident depends upon whether the lamp was alight at the time. It is the duty of the master of every station to see that the tail lamp of each train is fixed and alight on leaving the platform, and a strict inquiry must be made as to whether this precaution was properly carried out with regard to the train in question, both at the South Yarra and Richmond stations. The guard of the train, Thomas Sampson, had his hand severely injured, but, like the rest of the officials at the Melbourne station, he declined to give any information whatever. The news of the collision naturally created the greatest excitement among the usual passengers by the Suburban Railway, and many were so much alarmed at seeing the numbers of injured persons being removed in cabs and on stretchers, that they left the station, preferring to go home by cab rather than run the risk of the train. The engine was supposed to have been much injured by the collision, as from the place wher it occurred, according to the statement of one passenger, the train progressed by jerks to the Flinders-street terminus.’

A month or so later, on 17 October 1871, The Argus printed a report on the artist’s recent activity, but made no mention of the von Guérards’ involvement in the railway accident:

‘M. von Guerard has just completed, for the German Consul, two cabinet pictures, representing some of the finest portions of the mountain scenery of Victoria. Tho subject of one is Rose’s Gap, at the northern end of the Grampians ; and by selecting sunrise as the period of the day depicted, the artist has been enabled to introduce some striking atmospheric effects, more particularly as regards a rift of light between two mountains, the more distant of which is enveloped in a veil of luminous haze, while the nearer one stands out in gloomy prominence. A flight of white cockatoos gambolling in the first rays of the sun lend life to the scene. The other picture is a view of Mount Langi Gerang from Pleasant Creek, and is exceedingly effective by reason of the artist’s skilful treatment of his distances.’