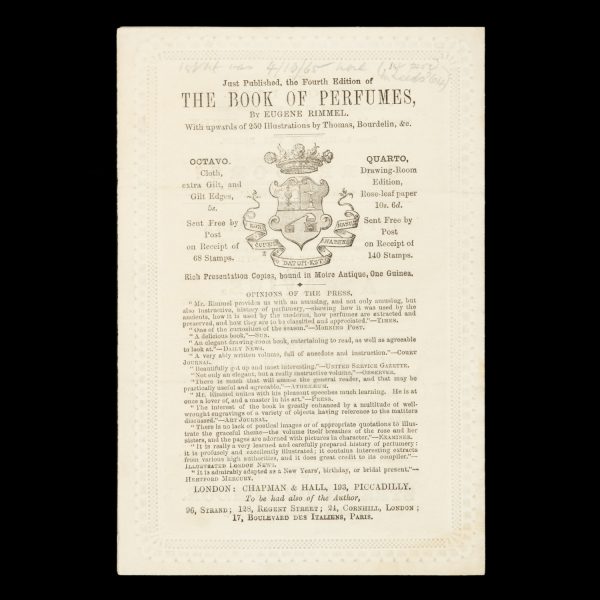 [GOLD RUSH] Royal Princess’s Theatre, Oxford Street. This evening, … It is Never Too Late To Mend! By Charles Reade, Esq.

London : s.n., [1865]. Programme, small octavo (178 x 120 mm), [4] pp; embossed decorative borders, front with lithographed view of the Royal Princess’s Theatre, centre pages with full cast list and detailed ‘Programme of Scenery’; Act III, which is titled ‘Life in Australia’ and is set on the goldfields, includes the scenes ‘Log Hut in Australia’ and ‘A Ravine’, where the plot centres around ‘The Great Nugget’; rear side with advertisement for Rimmel’s Perfumes; in superb condition.

The English dramatist and novelist Charles Reade (1814-1884) wrote several successful plays in the 1850s. It is never too late to mend : a matter of fact romance (1856) was his first novel, and it too was quickly adapted for the stage. Largely based on his earlier play Gold (1853), which was set on the Australian goldfields, Never too late to mend is a melodrama that also makes a damning attack on the harsh and abusive English penal system. It was first performed in 1858, and its popularity with English audiences gave it some longevity, with productions still being staged in the 1880s.

The first performance of Never too late to mend at the Royal Princess’s Theatre in London’s Soho was on 4 October 1865. This undated programme records “last night but ten”, suggesting it was likely to have been printed during November 1865. The production starred Mr. Gaston Murray, Mr. George Melville and Mr. [A. B.?] Tapping.

Numerous examples of broadside playbills and advertisements for Never too late to mend, for various productions staged between 1858 and 1883, are held in Australian libraries.

However, Trove locates no programme for any production of the play, making this extremely well preserved example  – printed by the theatre and purchased by a patron who witnessed the play – a rare and significant survivor.