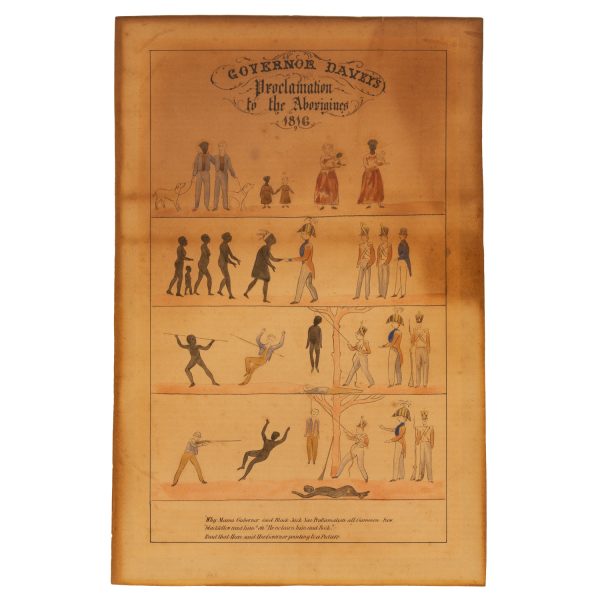 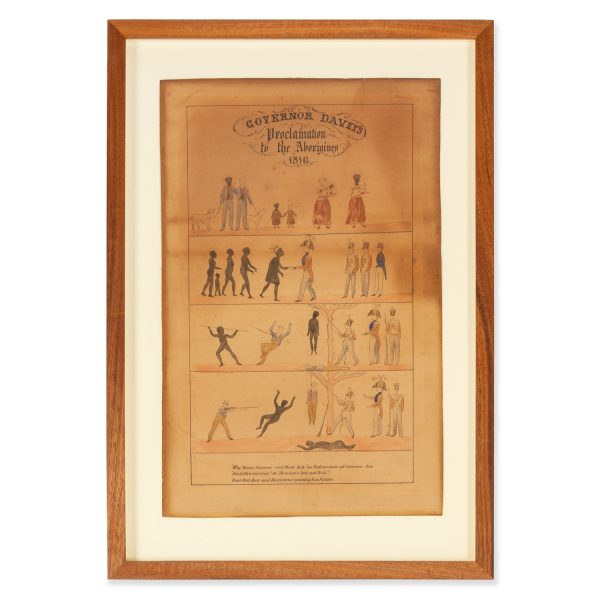 Governor Davey’s Proclamation to the Aborigines, 1816.

[Circa 1890]. Watercolour and ink on paper, 400 x 235 mm (image), 460 x 290 mm (sheet), with calligraphic caption in black ink at head of image (erroneously attributing the Proclamation to Governor Davey) surmounting four illustrations separated by ink-ruled lines; these pictorial sequences are intended to be read from bottom to top, and they depict (i) a British man shooting an Indigenous man and being hanged as a consequence, (ii) an Indigenous man spearing a British man, and being hanged, (iii) a group of Indigenous people shaking hands with the Governor, and (iv) Indigenous and European men, women and children, all in European clothes, standing side-by-side as friends; at the foot in manuscript is an imagined dialogue between an Indigenous man and the Governor: ‘”Why Massa Gubernor”, said Black Jack. “You Proclamation all Gammon – how blackfellow read him eh! He no learn him read Book.” “Read that then”, said the Governor pointing to a Picture’; surrounded by a black ink border; closed tear at upper right edge extending approximately 150 mm into the image, light staining and browning, old mount burn; mounted in a glazed Tasmanian timber frame.

A rare late nineteenth-century hand-drawn rendering of one of the hand-coloured lithographs produced by the Tasmanian Surveyor General’s Office in 1866 which were sold to the public as souvenirs at the Intercolonial Exhibition in Melbourne that year and at the Paris Exposition Universelle in 1867. That lithograph design was in turn based on the timber proclamation boards made in 1829 by George Frankland at the request of Lieutenant-Governor George Arthur (not Thomas Davey, Governor of Van Diemen’s Land 1812-1817).

The original boards were fastened to trees where Aboriginal people might notice them, with the intention of broadcasting the way in which colonial justice worked. The design explicitly illustrates capital punishment for both whites and blacks who commit murder; it also attempts to promote – albeit hypocritically – peaceful relations between blacks and whites. This was in the period immediately following the declaration of martial law in 1828 when the infamous military operation known as the “Black Line” was implemented, resulting in the rounding-up of Tasmania’s Indigenous population. Of the one hundred or so original proclamation boards designed by George Frankland which were nailed to trees, only seven are known to have survived.