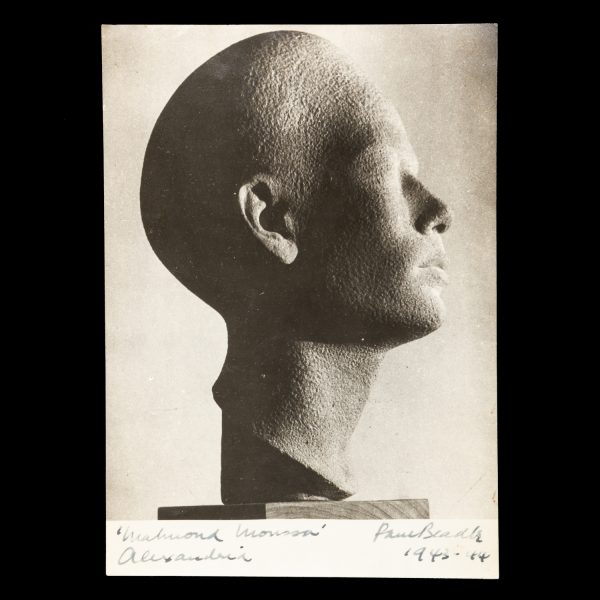 “Mahmoud Moussa” and “Fahima” : photographs of two works by Australian-New Zealand sculptor Paul Beadle, both signed and dated by the artist “Alexandria, 1943-44”.

Alexandria, Egypt : Paul Beadle (?), 1943-44. Two silver gelatin photographs (possibly taken by the artist himself), each in identical 185 x 130 mm format; signed and dated by the artist in the lower margin recto ‘Paul Beadle, Alexandria, 1943-44’ and with his identifying captions ‘Mahmoud Moussa’ and ‘Fahima’, respectively; both prints are unmounted and in very good condition.

From the NPG (Canberra):

‘Paul Beadle (1917-1992), sculptor, was born in England and studied at the Cambridge Art School and the Central School of Arts and Crafts during the 1930s. He arrived in Australia in 1944 and became known for his ‘bronzetti’ satirising history, literature and politics. He taught at the NAS for four years before becoming head of the Newcastle Art School in 1952; later he was principal of the South Australian School of Art for two years. Beadle made the 11-metre high eagle and sphere surmounting the Australian-American Memorial at Canberra’s Russell Offices, which was completed at a cost of 100 000 pounds (much of it raised by public subscription) in early 1954. In 1961 he moved to Auckland to take up the position of Chair of Fine Arts at the University’s Elam school. In 1969 he exhibited at the Bonython Galleries in Sydney as well as in Adelaide and Auckland; up to the mid-seventies he showed at Australian Galleries in Melbourne.’

During World War Two, Beadle served in the Royal Navy and was stationed in Egypt in 1943-44 – where the two works Mahmoud Moussa and Fahima were made – prior to his coming to Australia as a submariner-artist.