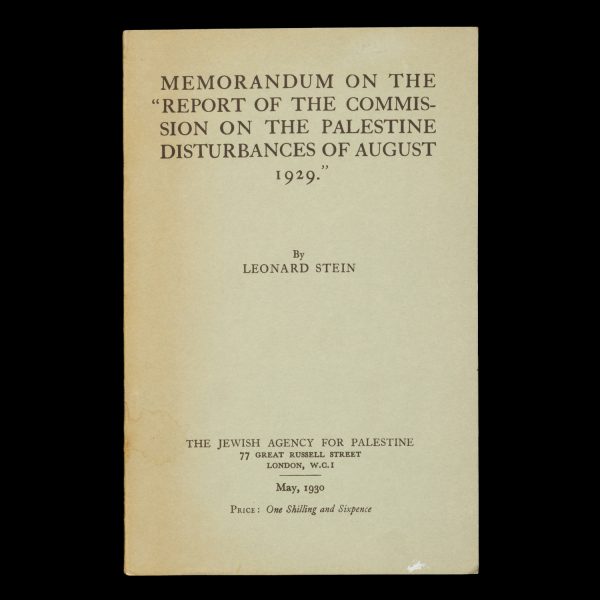 Memorandum on the “Report of the Commission on the Palestine Disturbances of August 1929.”

London : The Jewish Agency for Palestine, May 1930. Octavo, original printed grey wrappers (sunned along spine and with a couple of insignificant marks), pp 111; internally clean and bright, a near fine copy.

A rare Zionist publication issued as a response to the Shaw Commission Report of March 1930 on the riots that erupted in Palestine during August 1929, when long-standing tensions between Arab Muslims and Jews came to a head.

‘The 1929 Arab riots in Palestine, or the Buraq Uprising (Arabic: ثورة البراق‎, Thawrat al-Buraq), also known as the 1929 Massacres, (Hebrew: מאורעות תרפ”ט‎, Meora’ot Tarpat, lit. Events of 5689 Anno Mundi) refers to a series of demonstrations and riots in late August 1929 when a long-running dispute between Muslims and Jews over access to the Western Wall in Jerusalem escalated into violence.

The riots took the form, for the most part, of attacks by Arabs on Jews accompanied by destruction of Jewish property. During the week of riots from 23 to 29 August 133 Jews were killed by Arabs. Between 198–241 others were injured, a vast majority of whom were unarmed. At least 116 Arabs were killed, and 232 wounded, mostly by the Mandate police suppressing the riots. Around 20 Arabs were killed by Jewish attackers and indiscriminate British gunfire. During the riots, 17 Jewish communities were evacuated.

The British-appointed Shaw Commission found that the fundamental cause of the violence “without which in our opinion disturbances either would not have occurred or would not have been little more than a local riot, is the Arab feeling of animosity and hostility towards the Jews consequent upon the disappointment of their political and national aspirations and fear for their economic future,” as well as Arab fears of Jewish immigrants “not only as a menace to their livelihood but as a possible overlord of the future.” With respect to the triggering of the riots, the Commission found that the incident which “contributed most to the outbreak was the Jewish demonstration at the Wailing Wall on 15 August 1929”.’ (Wiki)