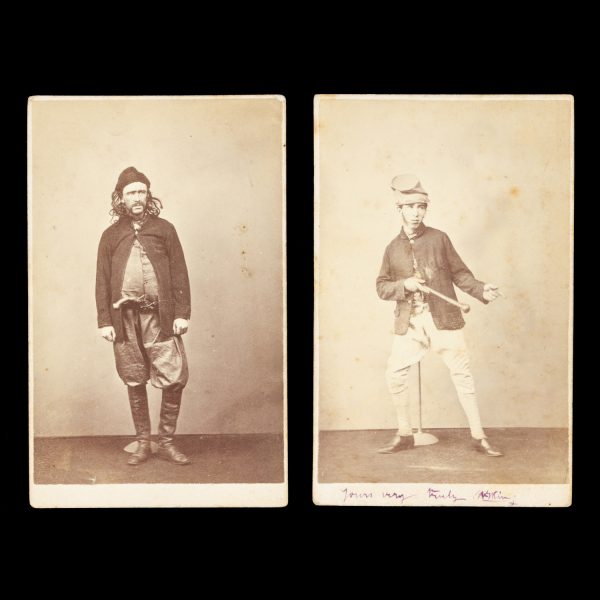 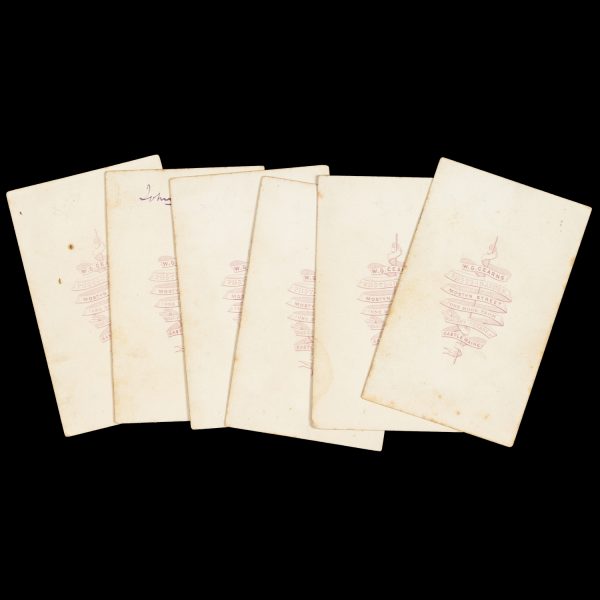 Six albumen print photographs in carte de visite format, 102 x 64 mm (mounts), versos with the highly decorative imprint of ‘W. G. Cearns, Photographer, Mostyn Street (one door from Market Square), Castlemaine‘; one of the backs also bears a caption in ink which identifies the actor on the front as ‘John Brown’; three of the prints have some minor spotting, otherwise all are in fine condition, as are the mounts.

An intriguing suite of studio portraits, probably of actors in a travelling theatrical troupe. They were taken by a professional photographer working on the Victorian goldfields about whom precious little is known, but who, it seems, was a pioneer of spirit photography in the Australian colonies. Contemporary newspaper reports from 1869 (see below) would suggest that W. G. Cearns was among the earliest – and very possibly, was the first – practitioner of spirit photography in Australia. However, none of Cearns’ spirit photographs, produced while he was an assistant at Charles Wherrett’s Castlemaine studio in 1869, are known to be extant. The enigmatic Cearns is also highly obscure: he is not mentioned by Davies & Stanbury (Mechanical Eye), and we have not been able to trace any other photographs with Cearns’ own Castlemaine studio back mark in Australian collections.

We know that W. G. Cearns was active as a photographer in Hong Kong, in partnership with Wiebeking, in 1866 and possibly 1865. This partnership was officially dissolved on 24 September 1867.

A shipping notice in The Australasian, 28 September 1867, records that W. G. Cearns arrived at Hobson’s Bay, Melbourne on the barque Ino on 21 September, having embarked as a cabin passenger at Foo-chow-foo on 6 July.

An article in the Mount Alexander Mail, 15 September 1869, reports on Cearns’ spirit photographs, produced during his time as an assistant to the Castlemaine photographer, Charles Wherrett. Two days later, in the same newspaper, an even lengthier article appeared headed Spiritual Photographs at Castlemaine. The Melbourne newspaper, the Weekly Times, deemed the Mail story worthy of comment in an editorial a few days later, on 18 September 1869: ‘Spiritual photographs at Castlemaine, says the Mail, continue to attract the attention of our local savants. The operator (W. G. Cearns) by whom they are taken, has been narrowly watched, and the studio of Mr. Wherrett examined ; but, to the curious, the mystery of the process still remains unsolved.’

A short time later Cearns evidently left Wherrett, and we find him working under his own name, with a studio in the centre of Castlemaine. The following advertisement appeared in the Mount Alexander Mail, 13 January 1870: ‘Now open: Cearns’ New Portrait Rooms, Mostyn Street. One door from Market Square.’

Cearns continued to advertise in the Mail throughout January, February and March 1870.

On 29 August 1871 a funeral notice appeared in the same newspaper for a Private Cearns of the Volunteer Corps, who had played in a military band at Castlemaine. It is not clear whether this is W. G. Cearns, but we come across no further reference to Cearns the photographer in colonial newspapers after this time.