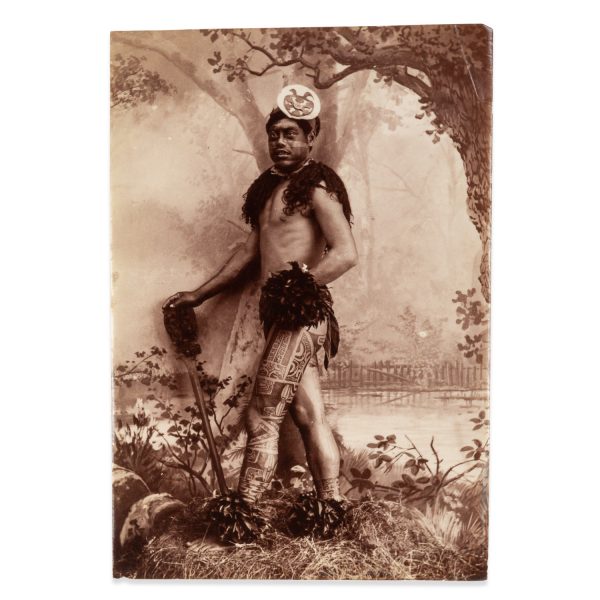 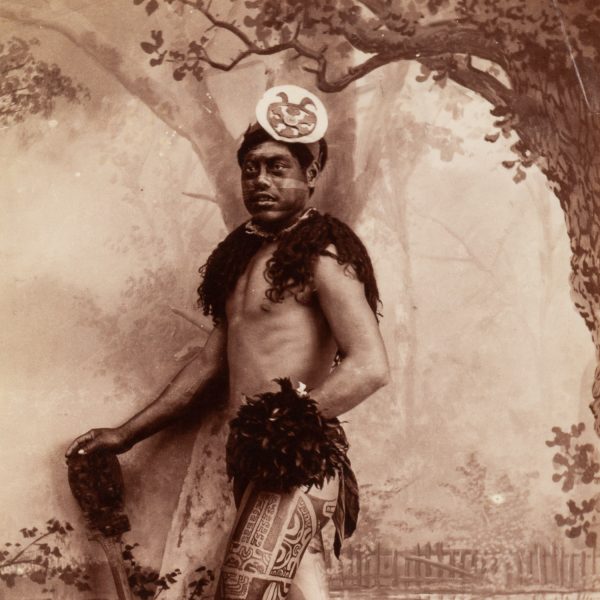 [Circa 1887]. Albumen print photograph, 200 x 140 mm, unmounted; verso with fully contemporary caption in pencil: Marquesan dancer; a strong print with rich tonal range and excellent clarity and contrast; the print is in very good condition, with the tiniest of nicks at two of the corners and some insignificant light creasing to the thin paper.

This culturally significant portrait of a tattooed Marquesan dancer was taken by Charles Spitz in his studio in Papeete, Tahiti around 1887 (cf. Tréhin, 89). Along with the perhaps more well-known image by Mrs Sophia Hoare (cf. Tréhin, 85), Spitz’s striking full-length portrait is one of the two key nineteenth-century photographic images documenting traditional Marquesan and, by extension, Polynesian tattooing practice.

The following extract from Frederick O’Brien’s Atolls of the Sun (New York : The Century Co., 1922, p. 343) records the remarks of an indigenous informant regarding the significance of tattooing in Marquesan society:

‘”Tattooing in these islands,” said Nataro, “was usually begun upon those able to pay for it at the age of puberty; but there were many exceptions of tattooing commenced upon boys soon after their infancy or deferred until mature manhood. Illness, poverty, or other obstacle might prevent, and the desire of parents might cause early tattooing. The father or other relative or protector of the youth or girl paid the tuhuka but at the festivals even the very poor orphans were given opportunities to be tattooed by a general contribution, or the chief of the valley paid the fee. Years were occupied at intervals in the covering of the entire body of men, which was the aim; but many had to be content with having a part pictured, and often elaborate designs were  never finished. You see many bare places, meant to be covered when the tuhuka began his work. Queen Vaekehu was converted to Christianity with but one leg done and forewent further beautification to serve her new God. Though begun in boyhood, the full adornment of a man could hardly be terminated before his thirtieth year. During his lifetime of sixty years he might have it renewed twice, and as each pore could not be duplicated exactly the third coat would make him a solid mass of color, the goal of manly beauty. Though men usually sought to look terrible so that when they faced their enemies they would inspire fear, with women the sex motif was dominant,” said Nataro.’