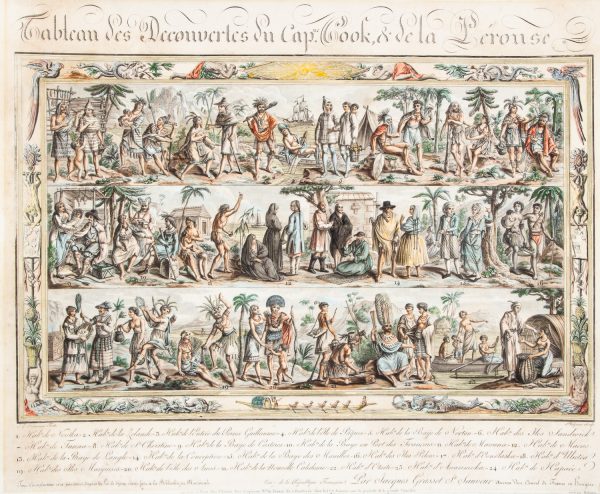 French-Canadian artist, writer, and diplomat Jacques Grasset de Saint Sauveur (1757-1810) was born in Montreal and moved to Paris following the annexation of New France by the British. He published a number of encyclopedias of ethnology, illustrated with fine engravings of peoples of the world. Forbes describes their collation as ‘a bibliographical nightmare’ (Forbes, 137).

The present engraving was originally issued in a portfolio of 5 engraved tableaux illustrating people indigenous to the five great continents (Europe, Asia, Africa, the Americas and the Pacific). The portfolio accompanied the book Tableaux des principaux peuples de l’Europe, de l’Asie, de l’Afrique, de l’Amerique, et les découvertes des Capitaines Cook, La Perouse, etc … , a volume of five parts published in the sixth year of the Republic (1798). This complete set of book with portfolio is very rare and held in only a couple of international institutions (none in Australia, although the University of Melbourne holds a copy of the book). It is described by Forbes (281). The following year, the seventh year ot the Republic (1798 or 1799), the five parts were reissued separately, each accompanied by one of the booklets originally issued as a bound volume of five parts. This individual booklet is titled Histoire Abrégée des découvertes des Captaines Cook, Wilson, La Perouse, etc … and includes a preparatory text describing Pacific voyages and then a description of the different ethnicities to be found on the accompanying engraving. This booklet is also rare; it is found in three Australian libraries (State Libraries of Queensland, Victoria and New South Wales) and is described by Forbes (271) and Beddie (258). Invariably, when copies of either the engraving or the booklet appear in the market, they are separated from one another, as to be expected.

The engraving is structured as three panoramic scenes, each with eight couples or groups from the various ethnicities depicted. The subjects range from around the Pacific, from Nootka Sound on Vancouver Island, to Easter Island, the Sandwich Islands, Tahiti, New Caledonia, and across to the Philippines and Macao. European ships, Chinese junks and native canoes populate the background and the indigenous peoples are depicted in their most distinctive native dress, usually engaged in a typical local activity. Occupying the decorative border is a melange of Pacific characters: bare breasted Tahitians holding baskets of breadfruit, fantastical sea monsters chasing native canoes and impish monkeys pointing to maps.

The structure of this highly decorative tableau is very typical of wall decorations such as murals or wallpapers being produced in France at the same time by firms such as Dufour and Zuber. Dufour would produce a gigantic wallpaper of similar subject matter titled Les sauvages de la Mer Pacifique in 1804-05 which was almost certainly based on this earlier engraving by Grasset de Saint Sauveur.