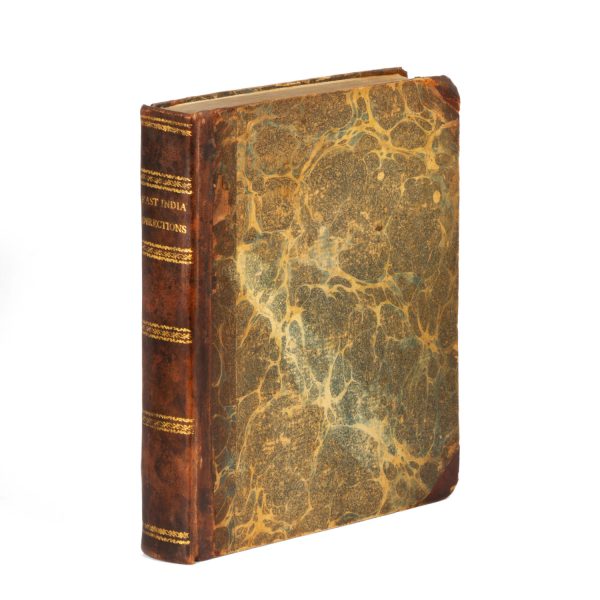 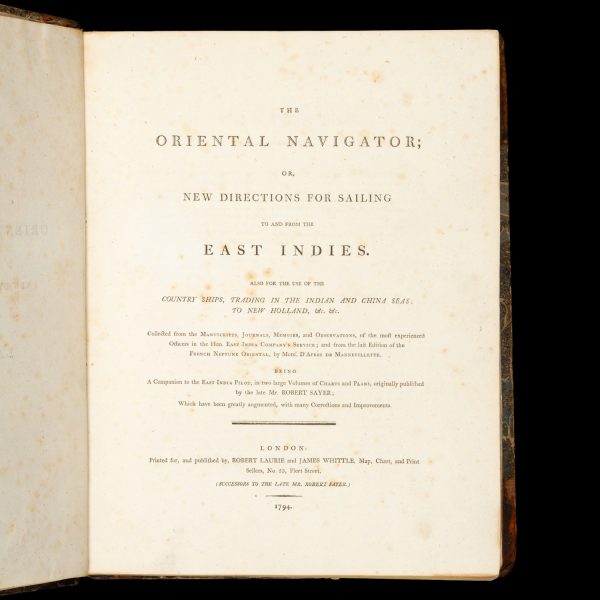 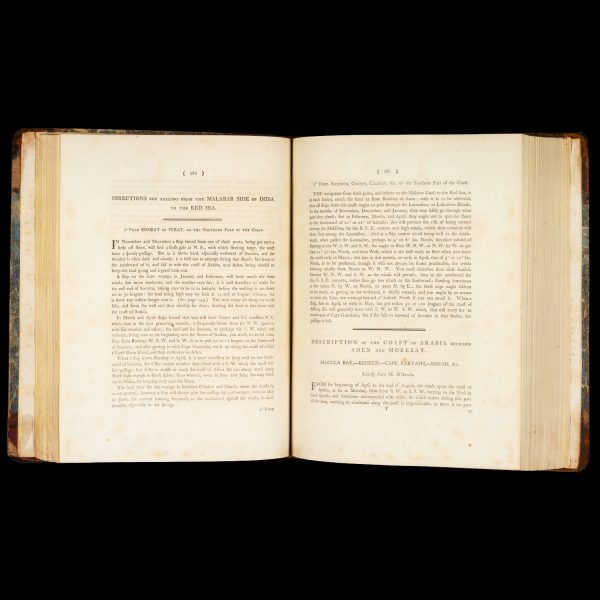 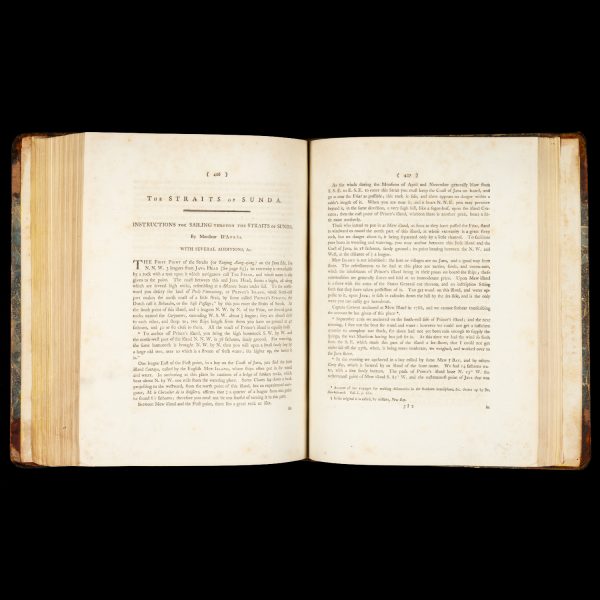 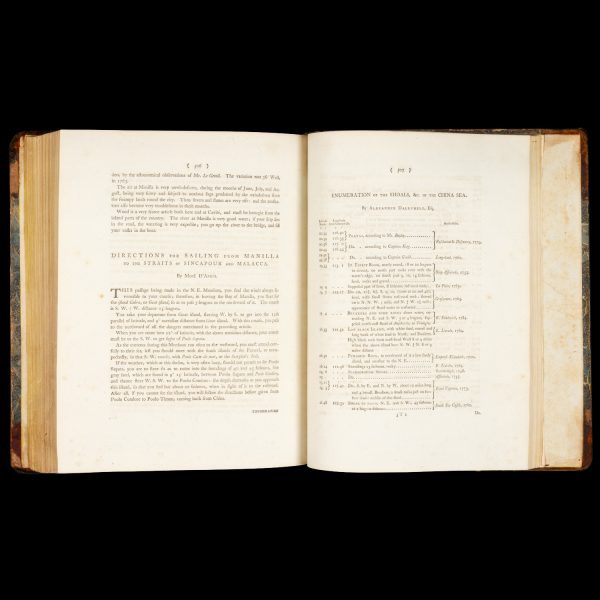 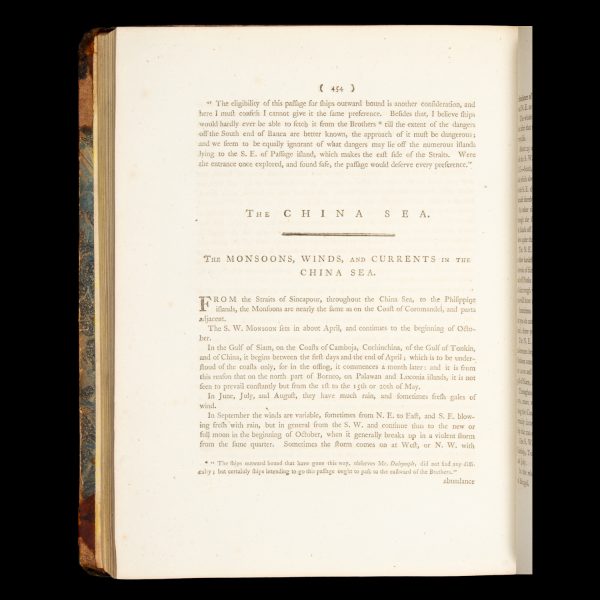 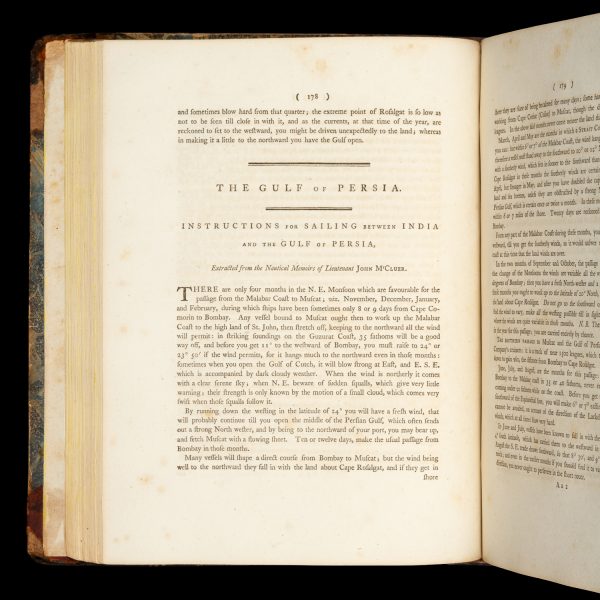 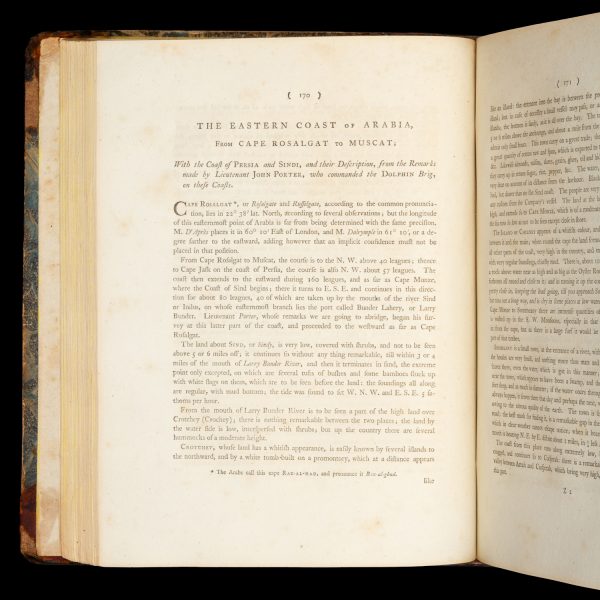 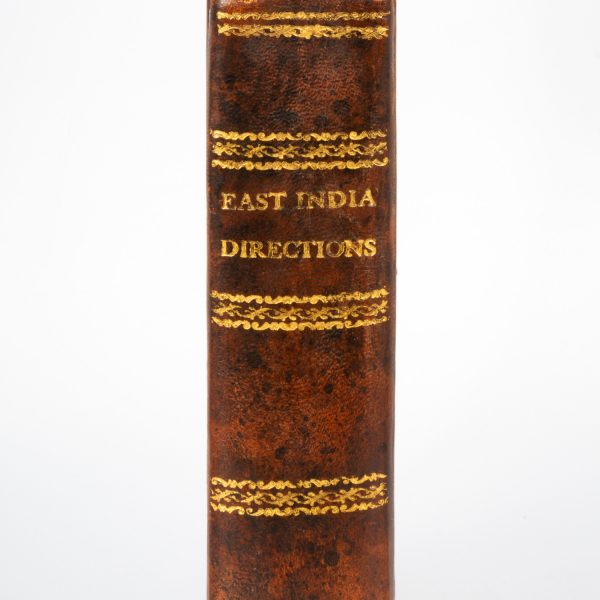 The Oriental navigator; or, new directions for sailing to and from the East Indies.

Also for the use of the country ships, trading in the Indian and China seas, to New Holland, &c. &c. Collected from the manuscripts, journals, memoirs, and observations, of the most experienced officers in the Hon. East India Company’s Service; and from the last edition of the French Neptune Oriental, by Mons. D’Après de Mannevillette. Being a companion to the East India pilot, in two large volumes of charts and plans, originally published by the late Mr. Robert Sayer; which have been greatly augmented, with many corrections and improvements. London : printed for, and published by, Robert Laurie and James Whittle, map, chart, and print sellers, (successors to the late Mr. Robert Sayer), 1794 (1797). First edition, first issue. Quarto (290 x 240 mm), contemporary half calf over marbled papered boards (heavily rubbed, corners worn), expertly rebacked in period style, front pastedown with bookplate of the Essex Institute (cancelled with its deaccession wet stamp), half title with early ownership signature of R. J. Cleveland, [i-vii], viii-xiv, 572 pp; pastedowns, endpapers, half title and title with foxing, with scattered lighter foxing throughout, else contents clean and sound; a good copy.

The scarce first issue of the first edition of Laurie and Whittle’s Oriental Navigator, in the manner of their predecessor Robert Sayer.

The Oriental Navigator is important for its detailed instructions to European navigators on piloting their vessels through the seas of Asia: rounding the Cape of Good Hope and the African coastline; crossing the Indian Ocean (describing a number of routes, including via the Cocos Islands and Christmas Island); sailing along the coast of the Arabian Peninsula and through the Persian Gulf; navigating the waters of India and Ceylon, Malacca and Singapore, Sumatra and the Indonesian Archipelago, China (including the Canton River), the Philippines, and the coastal regions of mainland South East Asia. It also contains information about the monsoon season in the Indian Ocean.

As stated on the title page, in 1794 Laurie and Whittle were appointed the successors to the map-making business of Robert Sayer (1725-1794), to whom Robert Laurie was apprenticed from 1770-1777. Sayer first published The Oriental pilot – an atlas of navigational charts – in 1778, with a separately published handbook to the atlas, Sailing directions for the East-India or Oriental pilot, for the navigation between England and the Cape of Good Hope, appearing in 1781. Sayer’s navigational pilot was issued intermittently during his lifetime. All copies are quite rare, and it is apparent most copies differ from each other as they are supplemented with updated maps including detail from the latest explorations. Upon Sayer’s death in 1794, it would appear Laurie and Whittle published this handbook, intended as an updated guide to the pilots which had been issued over the past sixteen years.

In 1797 Laurie and Whittle would publish a revised series of navigational charts under the title The Complete East-India Pilot, or Oriental Navigator … in two volumes with 114 charts, intended to guide navigators to the Far East. The same year, they reissued the handbook presented here, The Oriental Navigator, with an Appendix dated 1797 containing Captain Thomas Butler’s notes on his passage “from the Cape of Good Hope to China, round New Holland, in 1794”, plus an account of the voyage of the Royal Admiral, under Captain Henry Bond, to Port Jackson and thence to China, and other navigational commentary from the South Seas in the 1790s.

A second edition of The Oriental Navigator was printed in 1801 (not known to Ferguson) as well as an American edition the same year, with other editions following in 1808 and 1816. The compilation of the accounts has been attributed to Captain Joseph Huddart, a British hydrographer and navigator, who commanded several voyages to the East, including at the helm of the East Indiaman Royal Admiral (see above) on her maiden voyage in 1778.

The Sayers and Laurie & Whittle editions of the Oriental Navigator hold a place of great significance in the history of early commercial navigation to the Far East and New Holland. Copies of any edition are rare in the market. Very few eighteenth century editions have appeared for sale, and due to the nature of their use, these are almost invariably heavily worn from use.

Ferguson 191a (for the second issue only; the first issue not noted).