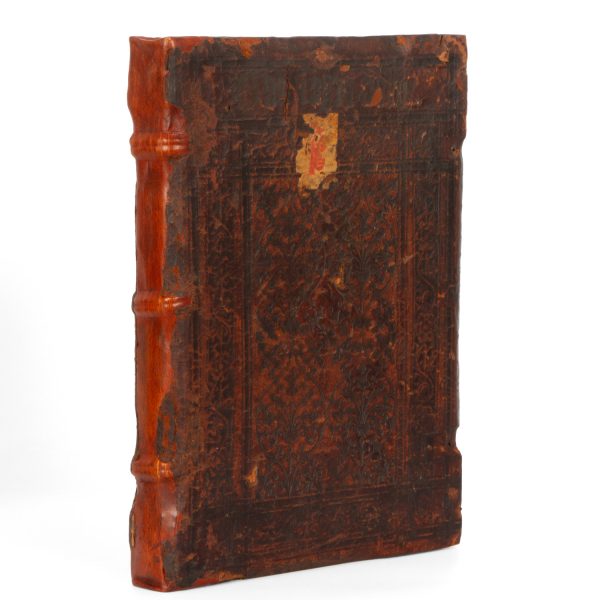 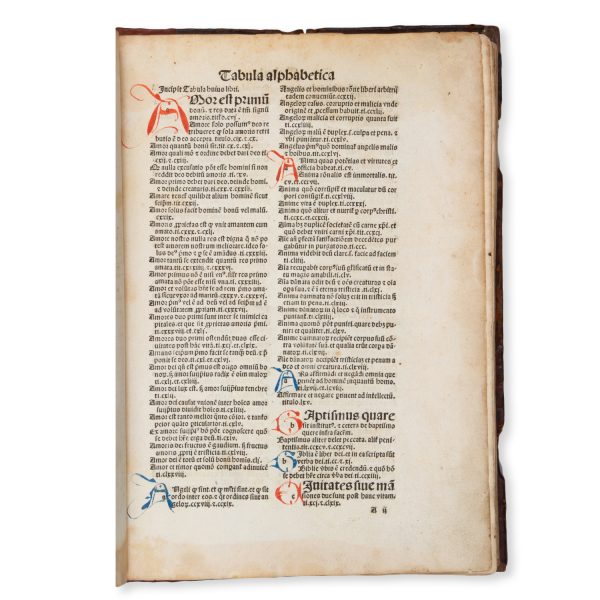 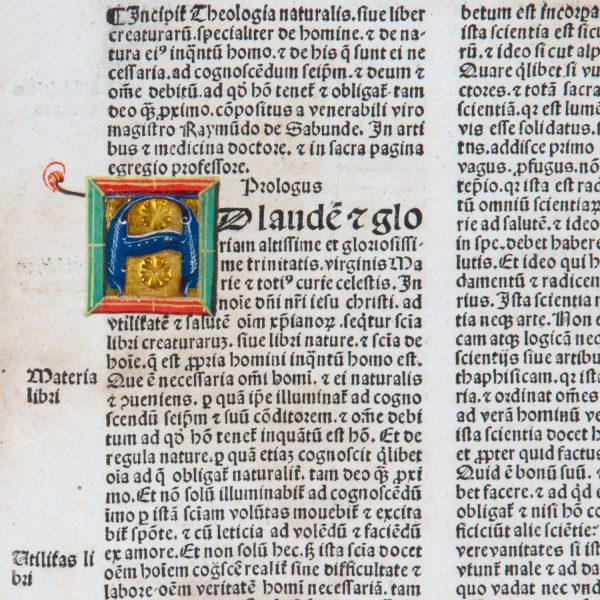 Impressus Nurembergae : Per Anthoniu[m] koberger [sic] inibi co[n]cluem, 1502. Folio (290 x 210 mm), contemporary sheep over wooden boards (lacking clasps), elaborate blind-tooling to both boards, upper board including a panel containing abbreviated title, below it a partially remnant contemporary paper label with manuscript in red and black; A-Q8 R6; title with early (unidentified) ownership inscription and annotation recording the Prologue’s inclusion on the Index Prohibitorum (1595); Prologue with illuminated initial tooled into gold leaf on a gesso ground, calligraphic initials in red and blue throughout; text in two columns; marginalia to Prologue; old repair to top edge of lower board; both boards with loss of leather in places, exposing the wood; hinges cracked, but sound; later rebacking in calf, with original spine partially preserved; internally in excellent condition overall, very occasional foxing and minor rodent damage to edges of a few leaves.

A key work in the development of natural theology, which attempts to reconcile twin sources of knowledge – the book of nature and the Bible – and, from that basis, argue that reason and philosophy are not incompatible with faith.

Raymond of Sabunde (Ramon Sibiuda) (c.1385-1436) was a Catalan scholar and teacher of philosophy and medicine. From 1430 until his death he held a position at the University of Toulouse, during which time he wrote Theologia naturalis, between 1434 and 1436. The work was composed in a Catalan-influenced Latin. It was later translated into French by Montaigne, in 1569. Earlier editions of the work were printed in Deventer, Strasbourg and Venice, the first being undated but probably from around 1484.

The printer, publisher and bookseller Anton Koberger (c.1440-1513) founded the first printing workshop in Nuremberg in 1470. He is best known as the publisher of the famous Nuremberg Chronicle.