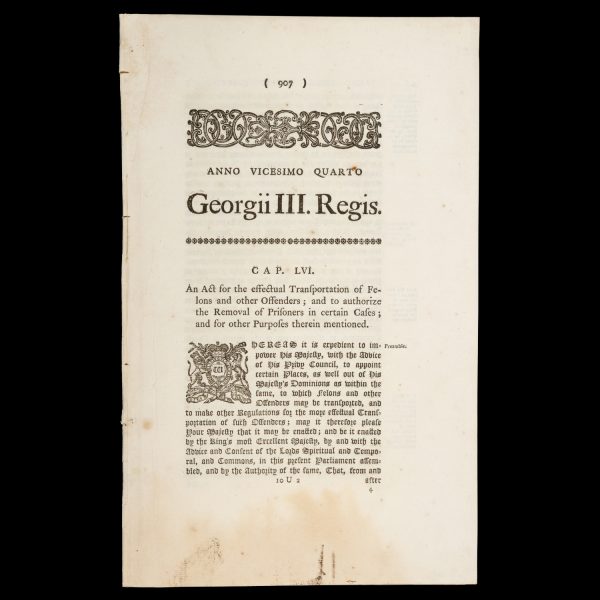 [TRANSPORTATION] An Act for the effectual Transportation of Felons and other Offenders ; and to authorize the Removal of Prisoners in certain Cases ; and for other Purposes therein mentioned.

The Transportation, etc. Act 1784 (24 Geo. 3 c. 56) was an important piece of legislation fundamental to the establishment of a penal colony in New South Wales, and, subsequently, Van Diemen’s Land (governed by New South Wales, 1803-1825).

‘The outbreak of the American Revolutionary War (1775-1783) halted transportation to America. Parliament claimed that “the transportation of convicts to his Majesty’s colonies and plantations in America … is found to be attended with various inconveniences, particularly by depriving this kingdom of many subjects whose labour might be useful to the community, and who, by proper care and correction, might be reclaimed from their evil course”; they then passed “An act to authorize … the punishment by hard labour of offenders who, for certain crimes, are or shall become liable to be transported to any of his Majesty’s colonies and plantations.” For the ensuing decade, men were instead sentenced to hard labour and women were imprisoned. Finding alternative locations to send convicts was not easy, and the act was extended twice by the Criminal Law Act 1778 (18 Geo. 3 c. 62) and the Criminal Law Act 1779 (19 Geo. 3, c. 54). This resulted in a 1779 inquiry by a Parliamentary Committee on the entire subject of transportation and punishment; initially the Penitentiary Act was passed, introducing a policy of state prisons as a measure to reform the system of overcrowded prison hulks that had developed, but no prisons were ever built as a result of the act. The Transportation, etc. Act 1784 (24 Geo. 3 c. 56) and the Transportation, etc. Act 1785 (25 Geo. 3 c. 46) also resulted to help alleviate overcrowding. Both acts empowered the Crown to appoint certain places within his dominions, or outside them, as the destination for transported criminals; the acts would move convicts around the country as needed for labour, or where they could be utilized and accommodated.

The overcrowding situation and the resumption of transportation would be initially resolved by Orders in Council on 6 December 1786, by the decision to establish a penal colony in New South Wales, on land previously claimed for Britain in 1770, but as yet not settled by Britain or any other European power. The British policy toward Australia, specifically for use as a penal colony, within their overall plans to populate and colonise the continent, would differentiate it from America, where the use of convicts was only a minor adjunct to its overall policy.’ (Wikipedia)