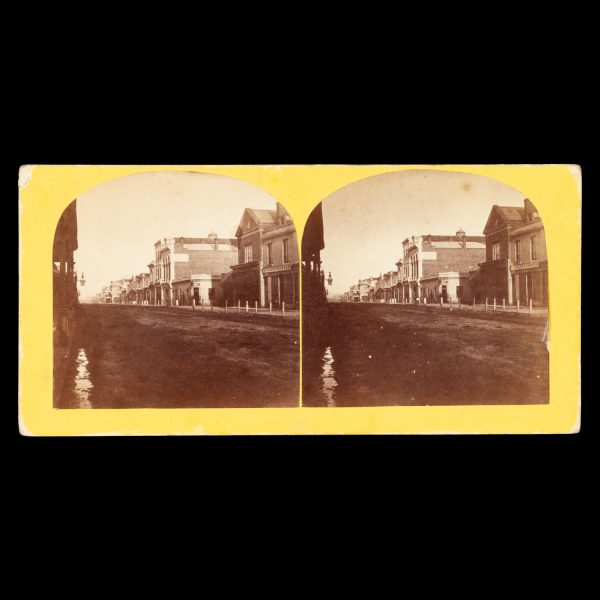 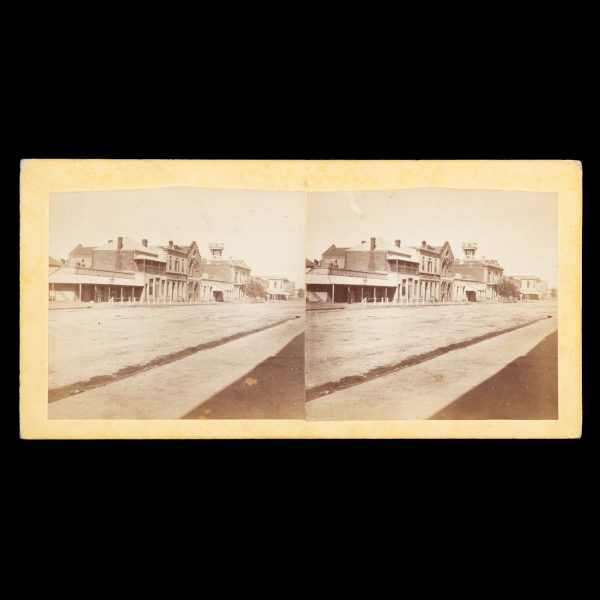 A pair of very early stereoview photographs of Adelaide streets, circa 1860.

Both views are exceptionally early and are possibly unrecorded. They appear to have been kept together for almost 160 years, as the manuscript captions on both are written in the same contemporary hand. It is likely that the same unidentified photographer was responsible for both views.

I. Adelaide, S.A. Rundle St. from Gawler Place, north side

[Title from contemporary ms. caption verso]. [Circa 1860]. Stereoscopic albumen print photograph, each individual image 73 x 76 mm (arched format), original yellow card mount 83 x 172 mm, verso with contemporary inscription in ink: ‘Adelaide, S.A. Rundle St. from Gawler Place, north side’; no photographer’s imprint; the right hand albumen print has a small spot of foxing at upper right, and a tiny tear at lower right edge, otherwise the prints are in fine condition, with rich tones and sharp detail; the mount has some mild wear at the corners.

A view of Rundle Street, looking east from Gawler Place. The thoroughfare is rough and unmade, and the puddles of water in the crude channel on the left side, which lend a noirish atmosphere to the image, suggest poor drainage. Much of the signage on the facades of the buildings along the south side of the street is easily discernible. In the foreground at right are the premises of wine merchants and cigarmakers Gerke and Rodemann (42 Rundle Street); beyond the Gerke and Rodemann shopfront are the Globe Inn, on the corner of Stephen’s Place – still at this stage a single-storey building (!) – and behind it the double-storey edifice occupied by J. Davis, Watchmaker and Jeweller; in the distance are Howell’s Book Depot, and a little further on a large sign above an archway reads Stationer.

[Title from contemporary ms. caption verso]. [Circa 1860]. Stereoscopic albumen print photograph, each individual image 77 x 71 mm (slightly arched), original yellow card mount 83 x 172 mm, verso with contemporary inscription in ink: ‘Adelaide. Grenfell St. from Gawler Place, south side’; no photographer’s imprint; the right hand albumen print has a small blemish (from the developing process) at upper right, and the left hand print has a tiny surface mark near the left edge, otherwise both prints are in fine condition, slightly pale; the mount is free from foxing.

A view of Grenfell Street, looking east from Gawler Place. A drainage channel runs the length of the image along the south side of the thoroughfare, which is otherwise rough and unmade. The photograph looks across to the Commercial Inn diagonally opposite on the north side. The early signage across the Commercial Inn’s facade is fully legible, including the proprietor’s name, James Curnow. Having previously owned the Commercial in 1845-49, Curnow took over the hotel for a second time from William James Bailey during the first half of 1860, which means the photograph can not have been taken earlier than that year. Curnow remained the pub’s owner until 1868. The awning is unstriped and more angular in shape than the awning which appears in early 1860s photographs. For example, a later view taken from almost the same vantage point by S. J. Dailey in 1864 is held in the State Library of South Australia (B 1265). In Dailey’s photograph, the hotel’s awning is vividly striped and more bow-shaped, and the trees which stand near the corner of King William Street are substantially larger than in the present photograph.