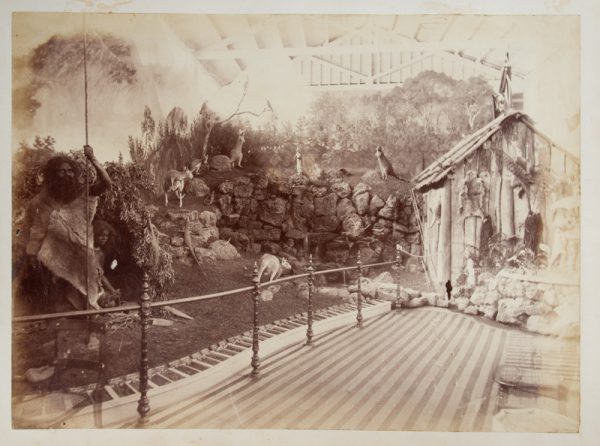 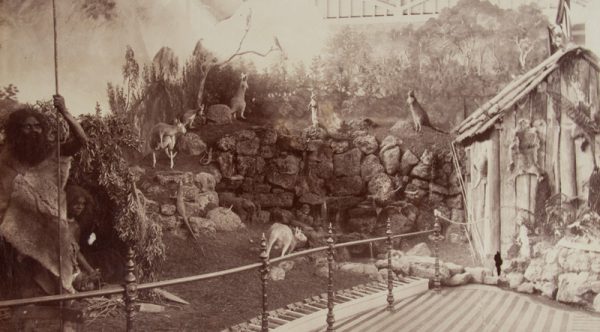 Albumen print photograph, 210 x 285 mm, laid down on its original album leaf of thin card, no photographer’s imprint; the albumen print is in good condition with excellent tonal range, a small surface blemish to the right of the Aboriginal figures in lower left corner, and some fading towards the upper and right margins; the mount with a few light marks; verso with a smaller format albumen print (probably also of the interior of the Exhibition Building), showing a display of jewellery in cabinets, including one case with printed sign reading ‘... of the Hanau jewellers‘.

Another view of the same scene, taken from a slightly different angle, is held in the collection of Museum Victoria, as part of an album of 61 photographs of the Melbourne Exhibition of 1880 presented by the Trustees of the Exhibition to its Assistant Secretary, Thomas B. Hill. It is believed that the photographer Ludovico Hart was given a private commission by the Trustees to photograph the exhibition. The similar view in the Hill album has a printed caption, ‘49. South Australian Court. Bush Scene’.

The diorama, which features two life-size wax models of a male and female Aborigine dressed in possum skin cloaks, is remarkably similar to a diorama sent by the Colony of Victoria to the London Colonial and Indian Exhibition in 1886. The two Aboriginal figures are positioned outside a mia-mia, with a small group of traditional implements scattered on the ground. Opposite the mia-mia is a settler’s bark hut with animal skins hung on the walls. A selection of taxidermied fauna, including several wallabies, large goannas and native birds, adorns the middle ground, with an impressive painted backdrop overlooking the entire scene; around the front perimeter of the diorama are what appear to be small plots of mineral and/or soil specimens from various locations in South Australia.

The diorama was designed by an English journalist living in Adelaide, Richard Twopeny (see McKay, Judith. A good show : Colonial Queensland at international exhibitions, Memoirs of the Queensland Museum, Cultural Heritage Series, Volume 1, Part 2b). Inspired by the success of the Melbourne Exhibition, Twopeny and his business partner, French entrepreneur Jules Joubert, staged their own smaller exhibitions in Adelaide, Perth and Christchurch in 1881.