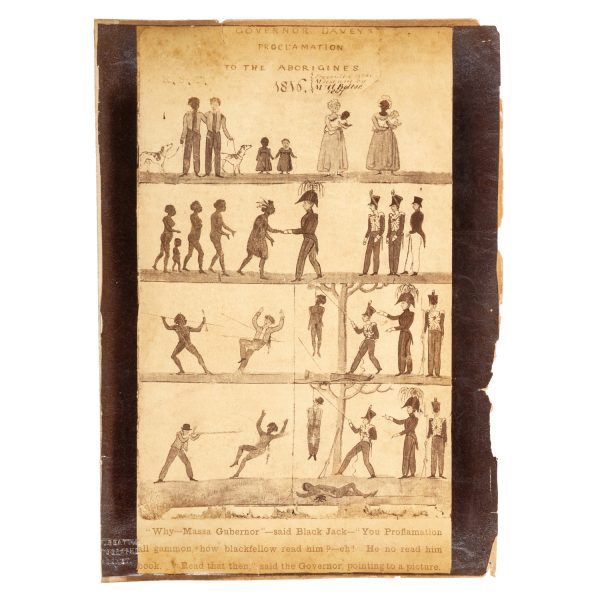 Governor Davey’s Proclamation to the Aborigines, 1816. Presented to the Museum by Mr. A. Bolter, 1867.

[Circa 1890]. [Title from image]. Albumen print photograph of a lithograph held in the collection of the Tasmanian Museum; 260 x 180 mm, blind stamped J. W. Beattie, Photographer, Hobart at lower left; laid down recto of a leaf removed from a 19th-century album; some short edge tears and light foxing at top edge, otherwise in good condition; verso with another Beattie albumen print, a topographical view captioned in the negative Hobart, from the bay. 786, B.

A rare late nineteenth-century photograph by J. W. Beattie of one of the hand-coloured lithographs produced by the Tasmanian Surveyor General’s Office in 1866 which were sold to the public as souvenirs at the Intercolonial Exhibition in Melbourne that year and at the Paris Exposition Universelle in 1867. The lithograph design was in turn based on the timber proclamation boards made in 1829 by George Frankland at the request of Lieutenant-Governor George Arthur (not Thomas Davey, Governor of Van Diemen’s Land 1812-1817).

At some point around 1890, Beattie photographed the lithograph which had been presented to the Tasmanian Museum by Mr. A. Bolter in 1867, and which carries an inscription to that effect at the foot of the heading. Beattie sold his albumen prints of the Proclamation Board lithograph to an entirely new generation of souvenir collectors, which is testament to the enduring power of Frankland’s imagery (from the perspective of a white audience, at least).

Frankland’s design for Governor Arthur’s original proclamation boards comprised four illustrations separated by ink-ruled lines; these pictorial sequences are intended to be read from bottom to top, and they depict (i) a British man shooting an Indigenous man and being hanged as a consequence, (ii) an Indigenous man spearing a British man, and being hanged, (iii) a group of Indigenous people shaking hands with the Governor, and (iv) Indigenous and European men, women and children, all in European clothes, standing side-by-side as friends; at the foot in manuscript is an imagined dialogue between an Indigenous man and the Governor: ‘”Why Massa Gubernor”, said Black Jack. “You Proclamation all Gammon – how blackfellow read him eh! He no learn him read Book.” “Read that then”, said the Governor pointing to a Picture’.

The original boards were fastened to trees where Aboriginal people might notice them, with the intention of broadcasting the way in which colonial justice worked. The design explicitly illustrates capital punishment for both whites and blacks who commit murder; it also attempts to promote – albeit hypocritically – peaceful relations between blacks and whites. This was in the period immediately following the declaration of martial law in 1828 when the infamous military operation known as the “Black Line” was implemented, resulting in the rounding-up of Tasmania’s Indigenous population.

Of the one hundred or so original proclamation boards designed by George Frankland which were nailed to trees by authority of Lieutenant-Governor Arthur, only seven are known to have survived. In what is an interesting coincidence, the Mitchell Library’s original board was purchased in May 1919 from none other than J. W. Beattie – who by that time had branched out from photography to become a dealer in curios and historical relics – for a mere £30.