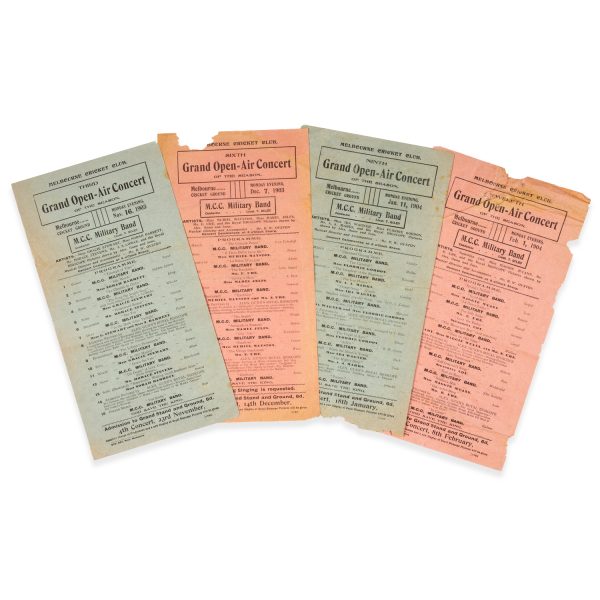 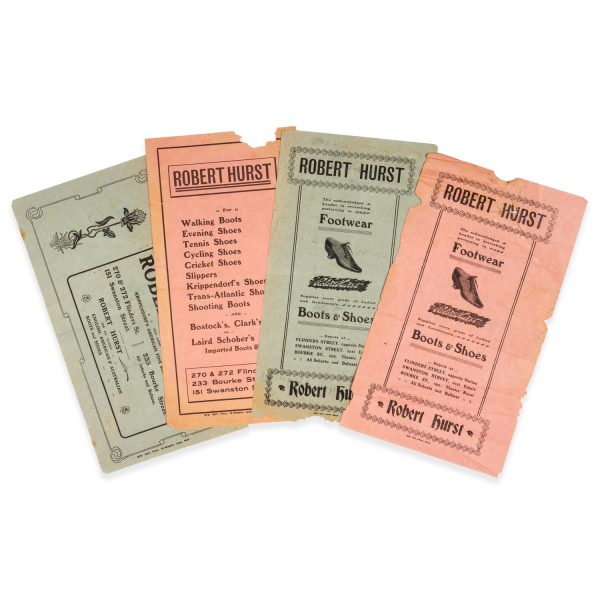 Group of four official programmes for Grand Open-Air Concerts at the M.C.G. organised by the Melbourne Cricket Club, 1903-04.

Melbourne : Syd. Day [for the Melbourne Cricket Club], 1903-04. Four individual programmes for Monday-evening concerts on 16 November & 7 December 1903, and 11 January and 1 February 1904. Narrow quarto (290 x 150 mm), single-sheet flyers printed on both sides (versos with advertisements for Robert Hurst shoes); each example has some marginal loss, but nonetheless this a rare and desirable group of survivors.

The summer public concerts at the MCG organised by the MCC were a feature of Melbourne entertainment and social life in the early Federation era. These 1903-04 concerts all featured the MCC Military Band under the baton of Lieut. T. Riley, as well as Alex. Gunn & Sons’ display of Royal Bioscope Pictures.

The Melbourne Cricket Club Annual Report for 1901-02 noted that “The Open-air Concerts have been carried out with marked success. Twenty-four Concerts were given, the average attendance of members at each Concert being 1641, the attendance of the general public also being of a very satisfactory character. During the season the Committee introduced a new feature – viz., the Edisonia pictures – which proved such a success….. As the Concerts have now become an established institution, the Committee hope during next season to make them still more attractive.”