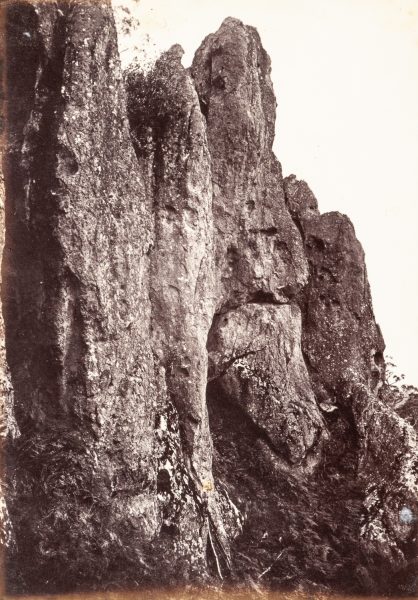 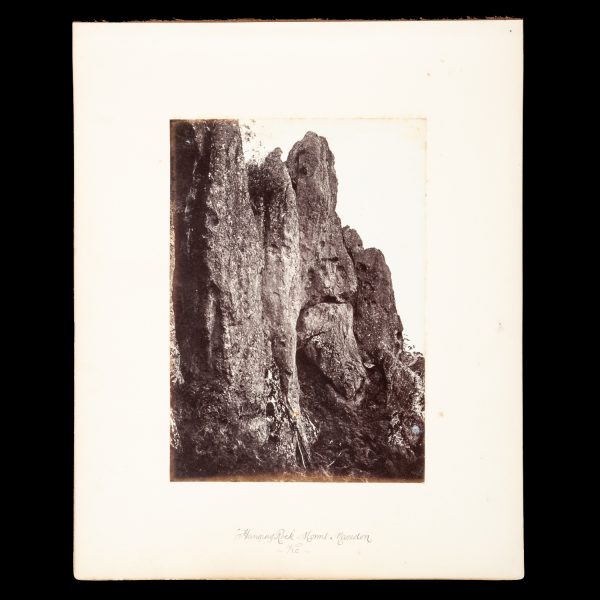 Albumen print photograph, 183 x 131 mm, mounted on a leaf of thick card removed from a 19th-century album, inscribed in ink on the mount ‘”Hanging Rock”, Mount Macedon, Vic.’; some insignificant spotting confined to the edges of the image, otherwise a strong print with excellent tonal range, in very good condition.

A very early photographic view of one of the most romanticised beauty spots in Victoria.

The National Gallery of Victoria (Accession Number PH106.6-1988) holds another print of the same image, which it dates to around 1876. It is on the original mount with Caire’s printed information, as follows: VIEW OF THE “HANGING ROCK,” NEAR MOUNT MACEDON. / COPYRIGHT REGISTERED. ANGLO-AUSTRALASIAN PHOTOGRAPHIC COMPANY, MELBOURNE. 10 Temple Court, Collins Street West. J.W. FORBES, Agent. VIEWS OF VICTORIA. / (GENERAL SERIES.) / No. 6. / VIEW OF THE “HANGING ROCK,” NEAR MOUNT MACEDON. / The Hanging Rock is situated about 5 miles in a north-easterly direction from the Railway Station at Woodend, / and is a very picturesque spot. Its formation is singularly peculiar, consisting of gigantic masses of basaltic rock / thrown up on end in a projecting or hanging position. Our illustration represents but a portion of the Rock, as it / is not possible to obtain a view of the whole of it in one picture. The height of these large boulders of rock vary / from 150 to 200 feet.