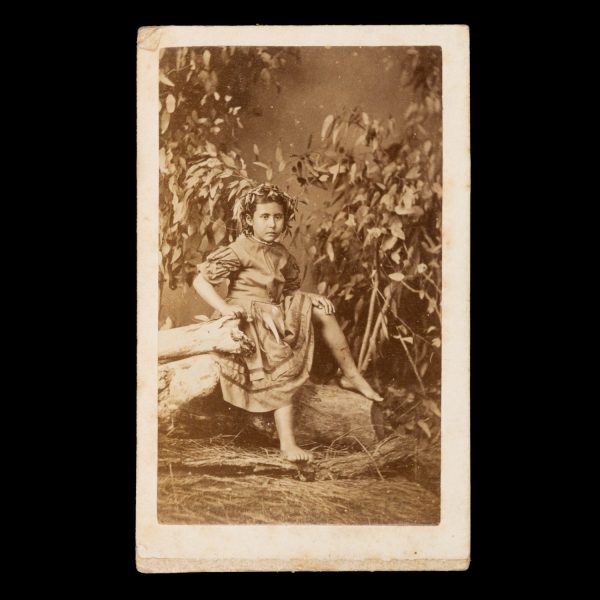 One of a seres of indigenous portraits taken in northeast Victoria around 1869 by travelling photographer Thomas J. Washbourne. These portraits were probably taken on the Aboriginal reserve at Tangambalanga near the Murray River, in Washbourne’s distinctive makeshift studio in which he made use of foliage and other props to create tableau scenes that possibly provided the inspiration for J.W. Lindt’s celebrated portrait series of Clarence Valley people taken in Grafton in 1872-73.

Maggie’s mother, Mary Jane, was the daughter of Queen Mary of the Wolgalu (Walgalu) people, whose country is centred around the headwaters of the Murrumbidgee and Tumut rivers in southern New South Wales. Mary Jane died in childbirth in Corryong. Maggie’s father was a white storekeeper from Wangaratta, Bill McDonald. Another copy of the present portrait held in the State Library of Victoria (the only example held in Australian public collections) bears an inscription which identifies the sitter as Maggie Stone and describes her as a “Quadroon” (i.e. a person of one-quarter Aboriginal heritage). Little Maggie was cared for and brought up by her grandmother Mary, and by King Billy, a Barwidgee speaker, on the reserve at Tangambalanga which had been gazetted in 1864. In 1873, Maggie would be removed by the authorities to Coranderrk.

The above information summarises the short biography of Maggie Stone on the excellent website Dhudhuroa and Waywurru Ancestors https://dhudhuroaandwaywurruancestors.wordpress.com/