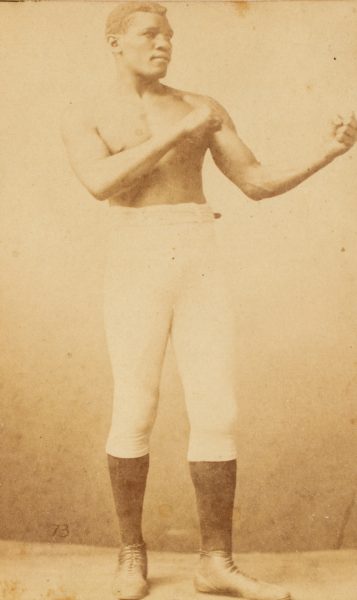 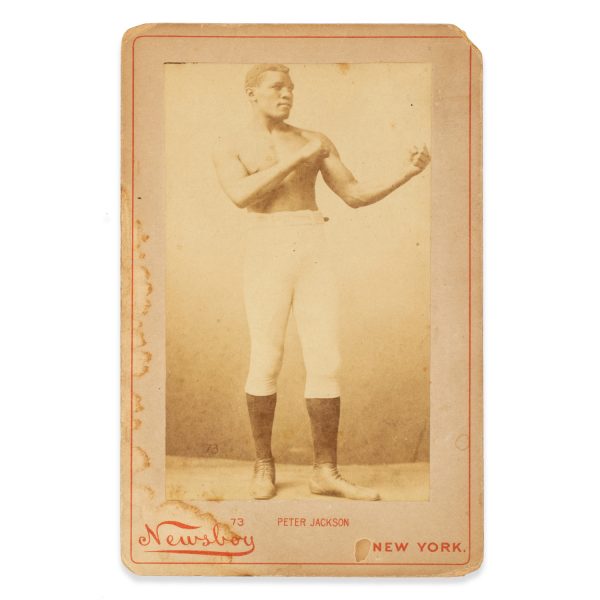 New York, USA : Newsboy, [circa 1890]. Albumen print photograph, cabinet card format, 167 x 109 mm (mount); mount with the publisher’s imprint and ’73. Peter Jackson’; the image has lost some contrast, and the mount has a water stain at left edge (not affecting the albumen print) and a chipped corner.

Jackson arrived in Sydney from the Caribbean in 1880 and adopted Australia as his home. After winning the Australian heavyweight title in 1886 he fought in North America and England. Although he garnered a reputation as one of the finest boxers of his era, the colour of his skin ultimately played a part in preventing him from challenging for the world heavyweight championship. He died in Queensland at the age of just 40.

The only original nineteenth-century photographs of Peter Jackson which Trove locates in Australian collections are held in the NLA.

The following is Richard Broome’s brief biography of Jackson in the ADB:

‘Peter Jackson (1861-1901), boxer, was born on 3 July 1861 at Christiansted, St Croix, Virgin Island, West Indies, son of Peter Jackson, warehouseman, and his wife, and grandson of Jackson’s freed slave Peter. [This last statement does not make sense. – ed.] He was well educated to primary level before going to sea. Landing in Sydney about 1880, he worked on the waterfront and in hotels before drifting into boxing in 1882 under the tuition of Larry Foley.

Between 1883 and 1886 Jackson fought seven times, once with bare knuckles, only losing to the Australian champion Bill Farnham in 1884. After two years as an instructor at Foley’s, he easily won the Australian heavyweight championship from Tom Lees in thirty rounds on 25 September 1886. Jackson’s magnificently trained and proportioned physique, 6 ft 1½ ins (187 cm) tall and weighing 190 lbs (86 kg), gave him a rare combination of speed and strength. An intelligent boxer rather than a slugger, he possessed a marvellous feint, strong jabs and a masterly left-right combination. On 18 April 1888 he left for the United States of America and Britain.

Jackson fought twenty-eight of the best men of England and America between 1888 and 1892, losing to none. The nearest he came to defeat was an eight-round draw in Melbourne on 21 October 1890 against Joe Goddard—he was undertrained and on a lightning visit to his adopted country, where he was fêted and accepted as an Australian. His most memorable fights were the 61-round, four-hour draw with James J. Corbett on 21 May 1891 at San Francisco and the hectic ten-round victory over fellow Australian Frank Slavin on 30 May 1892 in London. Jackson was one of the finest boxers never to fight for a world championship: John Sullivan refused to defend his title against a black and Corbett avoided Jackson once he gained the heavyweight crown in 1892.

Termed the ‘darkey’ or worse early on, Jackson became known as ‘Peter the Great’ or ‘The Black Prince’. He was always deemed a ‘gentleman’ and a ‘real whiteman’. His great sportsmanship and modesty reflected his nature, and also was a role forced on him by the exigencies of a black fighter in a white world. His deference, good looks, fine speaking manner and skill made him universally popular: he was one of the few boxers, black or white, allowed to move freely in the National Sporting Club rooms in London.

After 1892 Jackson was unable to obtain fights. Past his prime, he was debilitated by fast living and probably even then tubercular. He taught boxing, worked as a publican, toured as an actor in Uncle Tom’s Cabin and boxed exhibitions. In March 1898 he was sacrificed to Jim Jeffries, who flattened him in three rounds, and next year suffered the third of his losses in thirty-seven fights at the hands of a fourth-rater at Vancouver. Money was raised to send him to Australia, where he toured with Fitzgerald’s circus but he was too ill to box. After several benefits he was sent to Queensland where he died of tuberculosis at Roma on 13 July 1901. He was buried with Anglican rites and pomp in Toowong cemetery. A magnificent tomb was later erected by subscription with the words, ‘This was a man’.”