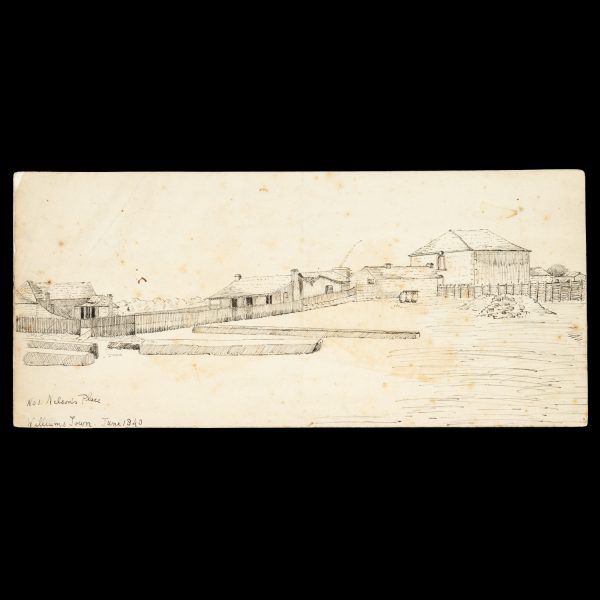 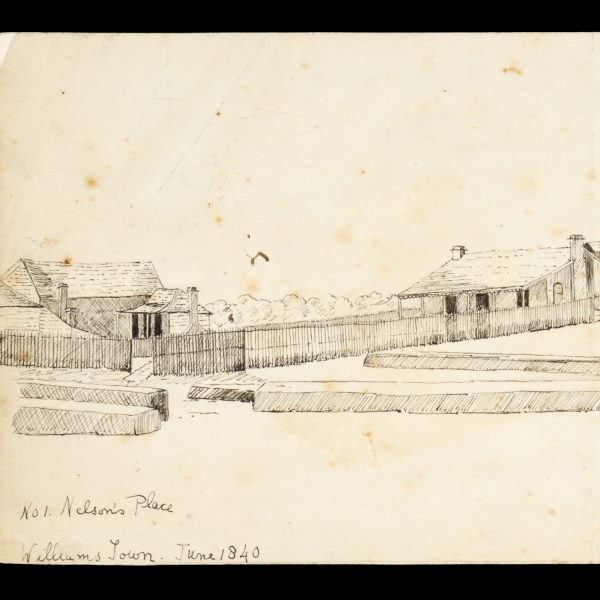 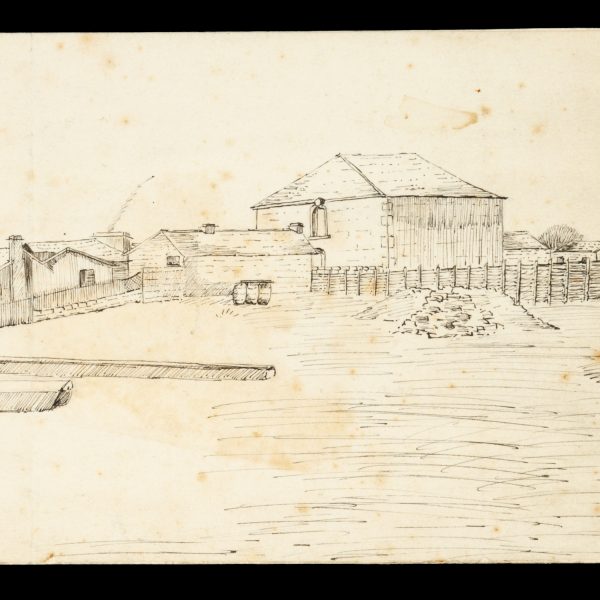 A very early view of Williamstown, Port Phillip, in the Colony of New South Wales. It shows most of the settlement’s first primitive buildings, which fronted Nelson’s Place (now Nelson Place) between present-day Thompson and Cole Streets, directly opposite the stone jetty (now the Gem Pier).

William’s Town, as it was originally known, served as Port Phillip’s first anchorage. Its first streets had been laid out during 1837, just some three years before the date of this drawing. Nelson’s Place was the only thoroughfare to speak of, running along the waterfront from north to south.

The later pencilled note on the back of the drawing refers to William H. Elsum, author of The history of Williamstown : from its first settlement to a city 1834-1934 (Melbourne : Frank S. Young, 1934); the drawing is indeed reproduced in one of the black-and-white plates in his book, where it is captioned An early sketch in Nelson Parade. Elsum does not give any provenance information, although the note on the reverse would imply that the drawing was lent to him for inclusion in his publication. He describes the drawing as follows:

‘The property shown in the sketch had been taken over from the original owner by a Mr. John Jeffreys, an English gentleman. My informant’s father, the late Mr. Arthur S. King, acted as Mr. Jeffrey’s agent in his land transactions. The old building shown in the foreground was a boarding house, and stood where to-day stands the Bay View Hotel, fronting Nelson Place. Behind it is shown the local depot of the Carlton and United Brewery … The larger building at the rear was built by the Langhorne brothers for the purposes of a wool store. It is of bluestone, and stands as solid to-day as at the time of its erection. It is associated with the brutal murder by the infuriated convicts of Superintendent Price … To-day the old edifice is utilised by the brewery as a storehouse. I was shown over the premises by the present manager, Mr. W. Parker, who for many years has been associated (as his late father before him, Mr. T. L. Parker) with the business and other activities in Williamstown, their birthplace. I was shown the solid stone steps worn down by the tread of the convicts during the period when it was used as a stockade; the pillar to which were fastened by chains the unfortunate wretches who had courted punishment for various misdemeanors, and the beam to which was hoisted the battered corpse of the murdered Price, away from the attention of inquisitive rats, pending the arrival of the coroner for the inquest. Reverting to the illustration, on the rest of the property shown facing Nelson Place was later erected a two-storied brick building consisting of four shops. The first of these shops situated on the corner of the lane which to this day leads up to the depot, was occupied for many years by Dunlea and Nicholson, grocers, and afterwards by Mr. Paton, and later Doig and Hall. The original hotel building was of weatherboard, and stood on the vacant land where, in the sketch, what appear to be logs of wood are lying.’ (ibid., pp 19-20).

Elsum further notes that in these early years (1837-1840) ‘the whole dismal environs were haunted continuously by voracious packs of wild dogs and dingoes, whose melancholy howling made night hideous….’ (ibid., p 21)

Plan of Williams Town, Port Phillip, 1840, a manuscript map held in the National Library of Australia (Rex Nan Kivell Collection, MAP NK 10490) was probably made only a few months before the sketch we offer here. It shows that the buildings in the sketch were situated on Allotment 2. Elsum (ibid., pp 11-12) goes into some detail regarding the first Wiiliamstown land sale, which was conducted in Melbourne on 1 June 1837. Up for auction at this sale were the adjacent Allotments 3-9 on Nelson’s Place (see NLA map), which all sold for between £40 and £52 each. According to the annotation on the NLA map, the original cost of Allotment 2 – which must have been sold prior to this sale – was £60.