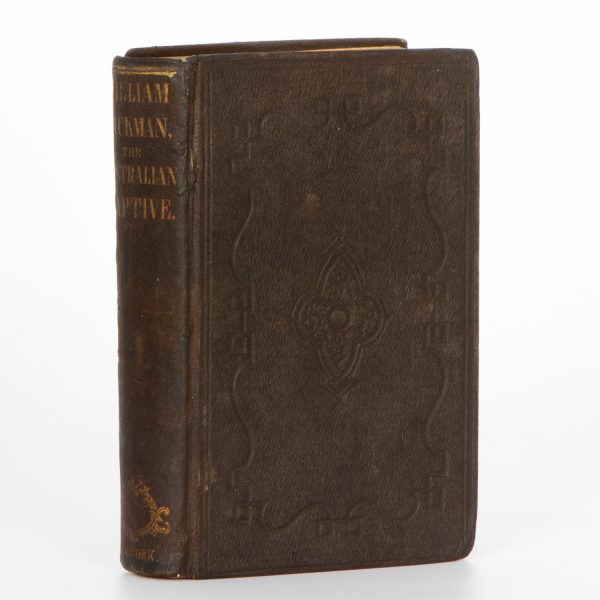 The Australian Captive; or, An Authentic Narrative of fifteen years in the life of Wm. Jackman. In which, among various other adventures, is included a forced residence of a year and a half among the cannibals of Nuyts’ Land, on the coast of the Great Australian Bight. Also including, with other appendices, Australia and its Gold, from the latest and best authorities…

Third edition of an American publication containing the narrative – based on real events, but apparently re-worked with some artistic license by the Rev. Israel Chamberlayne – of the experiences of escaped English convict and castaway William Jackman. The appendices on the Australian goldfields are quite detailed (pp. 367-392). The first edition was published simultaneously in New York and London in 1853, and a second New York edition had followed in 1855.

‘[Jackman] … claims that he sailed from Hobart on board the whaler Carib of Brixom [sic], England, and that on 28 April 1837 the ship was wrecked on the south coast nearly equidistant between Adelaide and King George Sound. This places it in the vicinity of Scorpion Bight. The vessel was commanded by Captain Thompson. Five of the crew were lost in the wreck, and Jackman became separated from the others. He then lived for some 18 months with the Aborigines in that area. The story has some aspects that are credible, and are supported to an extent by other evidence, such as the history related by the Aborigines. Jackman’s autobiography includes many verifiable facts and information that indicates he must have been in that area at some time. However, it appears that there was no vessel named Carib which departed from Hobart around that period … Jackman states that he was subsequently rescued by the Hobart owned whaler Camilla and, after continuing whaling for some months, the ship landed him at Albany on 27 June 1839. The Camilla was certainly whaling in the area during that time, having carried out eight voyages between 1838 and 1844. Jackman later walked to Two People Bay to join the Avis, an American whaler out of New London. This was wrecked in the bay during a gale; two other whalers, Harvest and Peruvian, both also at anchor, were undamaged. Both these vessels are recorded as being in the area at the time that the Avis was wrecked, having anchored at Albany in May 1842. Several days after the wreck of the Avis, Jackman signed on to the Elizabeth of New Bedford (Captain Esthman), also known to have been in the area at that time. He therefore has many facts to back his claim of shipwreck and survival. Some of his dates are incorrect, but the book was written some 17 years or more after the events so these are understandable. What is not proven is that a whaler named Carib was wrecked in April 1837.’ (Shipwreck Databases, Western Australian Museum)