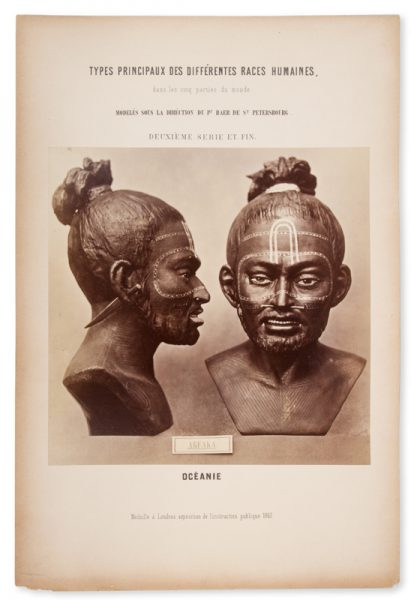 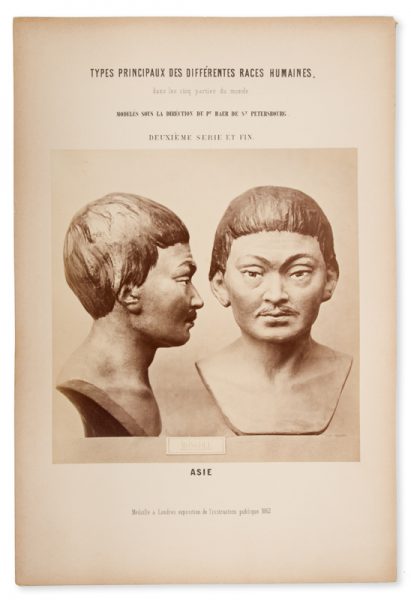 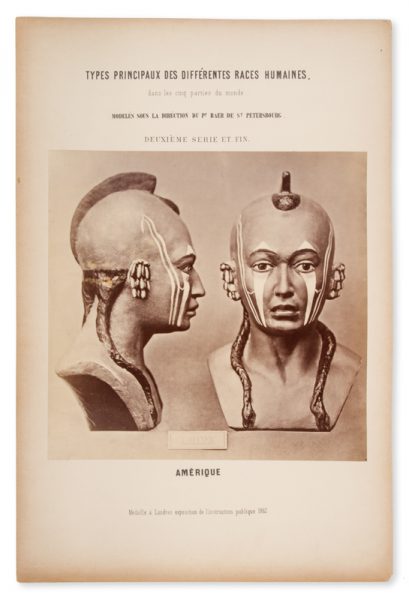 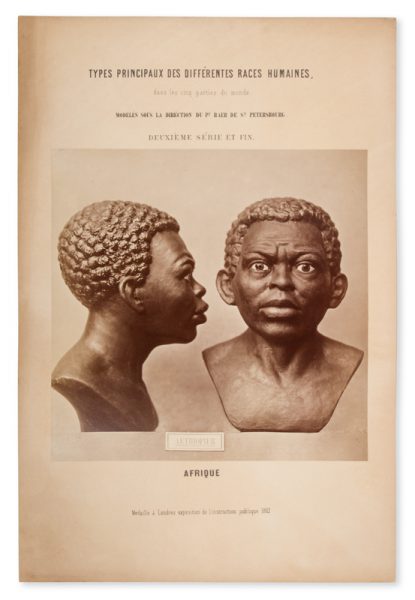 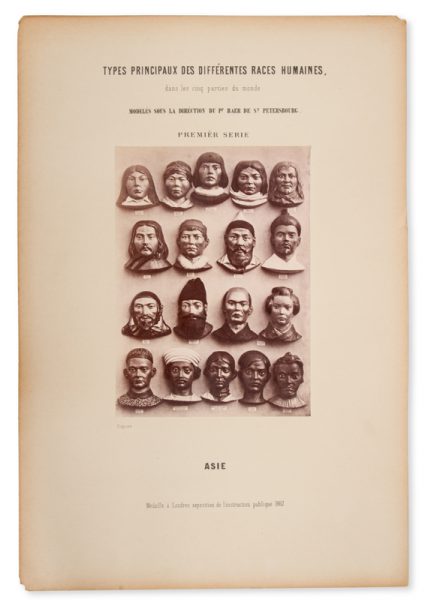 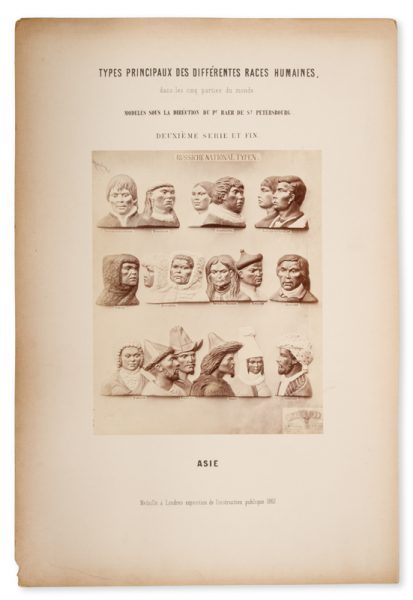 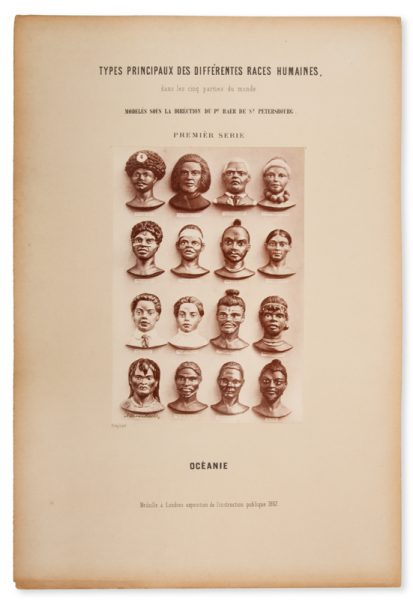 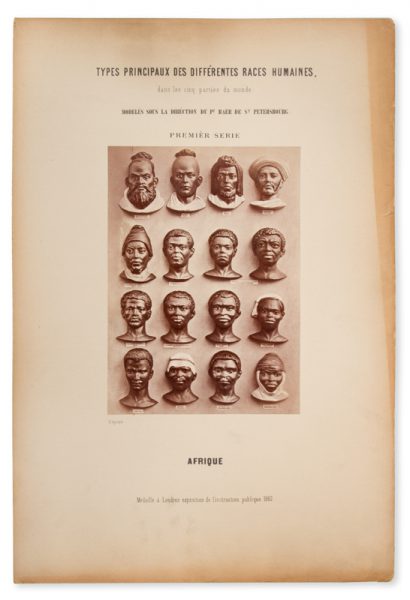 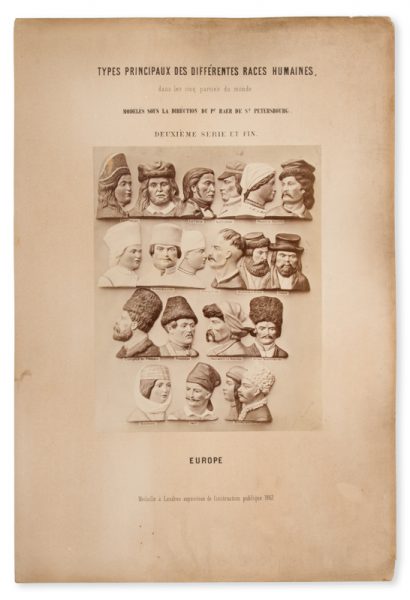 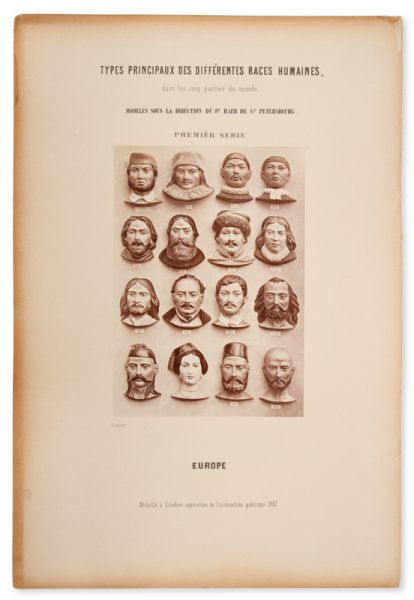 modelés sous la direction du Pr. Baer de St. Petersbourg. St. Petersburg : s.n., [1862]. Portfolio, 500 x 330 mm, original embossed boards with title to front, original silk ties, inner front board with early collection inscription in German; containing [12] albumen print photographs, [7] in format 225 x 165 mm, being the complete first series, each plate depicting 16 heads, and the second series (the two additional plates in this series of European and Russian types issued separately at a slightly later date, which are seldom found); and [5] in format 267 x 267 mm (the Supplément, also confusingly called the “second series”); all prints are on the original card mounts, 484 x 327 mm, each with short descriptive letterpress (general title above and name of continent that the photograph represents beneath the image) and “Médaille à Londres exposition de l’instruction publique 1862” at the foot; all of the albumen prints with excellent tonal range, the mounts free from foxing, original tissue guards intact; a fine set. Text in French.

Karl Ernst von Baer, born into the Baltic German aristocracy of present-day Estonia, was a distinguished Russian naturalist, biologist, geologist, meteorologist, geographer and explorer, best known for his contributions to embryology. Baer also had a keen interest in ethnology, and assembled an extensive collection of skulls for the Russian Academy of Sciences in St. Petersburg. He was instrumental in the creation of the German Anthropological Society and the founding of its prestigious journal, Archiv für Anthropologie.

The photographs in this portfolio illustrate a series of heads sculpted in Steinpappe (a particular form of papier mâché) which represent the various races of the world. The heads were sculpted by J.M. Heuser under the direction of Baer, and were displayed at the London International Exposition of 1862, where they were awarded a medal. Each of the seven prints in the first and second series depicts a composite group of heads from a particular region: Oceania; Asia; the Americas; Africa; Europe (2), and Russia. The five prints in the supplementary series each show a striking pair of close-up frontal and profile views of a single racial type. These include an Australian Aborigine; an “Ethiopian”; a Mongol; a Mohican, and a European. Each of these five plates is a superior variant of those in a set we have handled previously, being taken from a more sympathetic angle. The composite Oceania plate shows 16 heads of Polynesians, Melanesians, Micronesians and Australian Aborigines, and includes – perhaps most significantly – the heads of a man and woman of Van Diemen’s Land.

The University of Adelaide Library holds the only example of this rare portfolio in Australian collections (lacking the two additional plates of the second series).