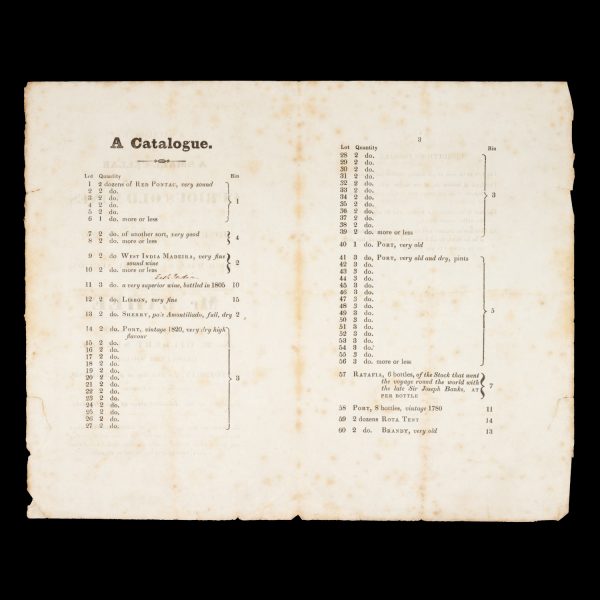 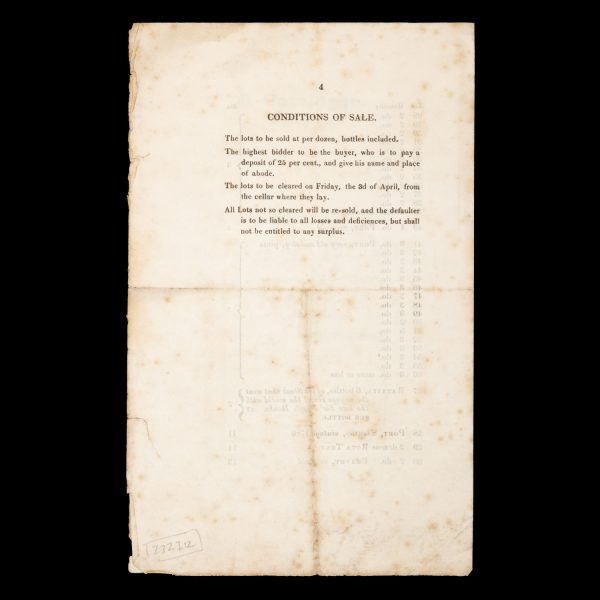 [WINE FROM THE ENDEAVOUR] A Catalogue of a Small Cellar of Curious Old Wines of the Late Joseph Steavenson, Esq. which will be Sold by Auction, by Mr. Lahee … No. 23, Gilbert Street, Grosvenor Square, on Tuesday, the 31st day of March, 1840, …

Apparently unrecorded, this unassuming little catalogue is a record of the sale by auction of wines from the deceased estate of London wine and brandy merchant, Joseph Steavenson. A note on the title-page reads: “The Wines are now laying at No. 86, Lisson Grove, where they have been bricked up the last TEN YEARS, and where they may be Viewed on Monday prior to the Sale … when Samples may be had on payment.” The sale was conducted at the late Mr. Steavenson’s Grosvenor Square residence by Samuel Lahee of New Bond Street, a well-known auctioneer and house agent.

Among the sixty lots offered for sale, most of which comprise fortified wines – port, sherry, madeira, or brandy – are eight bottles of port from 1780, a bottle  of “very fine sound” West Indian madeira, and “a very superior wine, bottled in 1805”, which the catalogue owner notes is from “East India”.

However, by far the most significant – and surprising – lot in the sale is lot 57: “Ratafia, 6 bottles, of the Stock that went the voyage round the world with the late Sir Joseph Banks.”

Official records show that the cargo of the Endeavour, the ship in which Cook discovered the east coast of New Holland in 1770 on his first voyage (1768-1771), contained 250 barrels of beer, 44 barrels of brandy and 17 barrels of rum. It was common practice in this era, however, for naval officers to bring their own supplies of alcohol on board. In the case of the gentleman naturalist Joseph Banks, this meant a supply of his favourite tipple, ratafia. A fortified wine, ratafia is a type of mistelle made by adding marc brandy to fermenting grapes in order to arrest fermentation and leave some residual sweetness.